Doctor Who: "Strangers in Space" 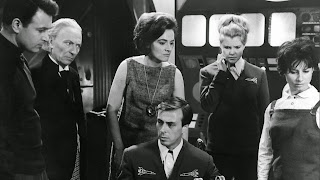 The TARDIS arrives on a human space vessel in the 28th century. Its crew are trapped in a sort of suspended animation, with the vessel held in orbit around the planet Sense-Sphere by the mysterious and mind-controlling Sensorites. When an unknown force steals the lock from the TARDIS door, the Doctor and his companions are trapped on the vessel as well.

With "The Sensorites", Doctor Who begins its seventh serial. The series so far has bounced from science fiction stories to historical ones and back again. "The Keys of Marinus" was followed by the historical "The Aztecs", so it's not a surprise to see the series bounce back again to the far future, and the orbit of a new alien world. The difference this time is that humans are there too. There weren't any in "Marinus" or "The Daleks", so in many respects this story of future humans under attack from aliens is the beginning of one of Doctor Who's oldest story tropes.

The episode begins in a remarkably clumsy manner, as the regular cast reminisce over the various adventures they've shared together. It works as an introduction for new viewers I suppose, but I can't imagine there wasn't an easier and more stimulating way to achieve it. To be honest things don't improve much when the cast venture out into the spaceship. Once revived, the human pilots Maitland and Richmond give similarly awkward explanations as to their situation and the Sensorites down on the planet's surface.

During its second half, however, the episode picks up remarkably. Barbara and Susan become trapped in the ship's aft compartment with John, Richmond's fiancée, who has been driven mad by the Sensorites' constant mental manipulations. The fear that the Sensorites themselves may return and take over the Doctor and his companions begins to grow as well, and as the paranoia develops so too does the quality of this episode.

The episode's cliffhanger, in which Ian urgent hisses for the Doctor to look, and the camera turns to reveal a Sensorite silently observing them through a porthole from outside of the ship, is pretty much the most frightening moment in Doctor Who so far. Of course we don't get to properly meet the Sensorites until the next episode, but based on first impact alone they're remarkably ominous.

A weak first half gives way to a remarkably effective conclusion. I'm giving "Strangers in Space" the thumbs-up. We're 31 episodes into the first series, and 22 episodes have been good. The quality ratio is 71 per cent.
Posted by Grant at 6:37 PM