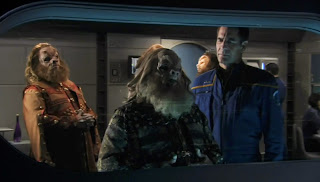 The Enterprise has been sent to escort the Tellarite ambassador to Andoria for a much-needed peace treaty between the two civilizations. While a Tellarite ship appears to destroy an Andorian vessel, all-out war is developing - unless Archer can find the parties responsible.

It was a short break for the series, but it's diving back into three-part serials with "Babel One". "Journey to Babel" was of the most famous episodes of the original Star Trek: it introduced Spock's father Sarek and mother Amanda, as well as both the Andorians and Tellarites. This, therefore, is the prequel. It also brings back the Romulans, last seen anonymously harassing the Enterprise back in Season 2's "Minefield", and now working with a disguised spaceship to stop the Alpha Quadrant races from banding together. This isn't just a return to the three-part stories, then: it's yet another Season 4 continuity porn bonanza.

The difference is that this is a continuity-fest that actually seems to work. The basic concept of the Enterprise's captain negotiating a peace accord while a third party secretly attempts to disrupt it is a classic sort of Star Trek plot that has been made many times before. This gives the episode a comfortable framework within which to play around. It's always fun to watch an Andorian episode in Enterprise, because it invariably means that Jeffrey Coombs is back as Commander Shran. He's as arrogant and volatile as ever, and consistently entertaining. I'm not surprised talks were underway to bring him into the regular cast for the prospective fifth season. He would have added a lot to the series.

The Tellarites return to the franchise for the first time since a Star Trek VI cameo. They're a little ordinary really: included because of their original series origins rather than any genuinely interesting aspects of their culture or species. Lee Arenberg plays their leader rather well, however, doing a good job - as does the script - of portraying a culture where harsh criticism and insults are relatively good-natured.

With the Romulans the episode once again walks a difficult tight-rope. The original series episode "Balance of Terror" firmly established that there had been no contact between humans and Romulans - indeed humans didn't even know what they looked like. As a result the episode cannot ever have the protagonists and antagonists meet face-to-face. The solution - a Romulan drone ship that is controlled remotely from light years away - is a clever plot device that also makes the episode fairly relevant to international conflicts at the time the episode was made. Of course original-style Star Trek would have found a way to make a comment on the inhumanity of drone warfare, but Enterprise is a different sort of series and doesn't generally go for the moral fables.

The plot twists and turns in an entertaining fashion, the performances are all strong, and it ends on a very good cliffhanger. I really hope the following two episodes are as enjoyable: Season 4 needs a few more good episodes. I'm 12 episodes in, and 50 per cent of them have been good.
Posted by Grant at 8:48 AM