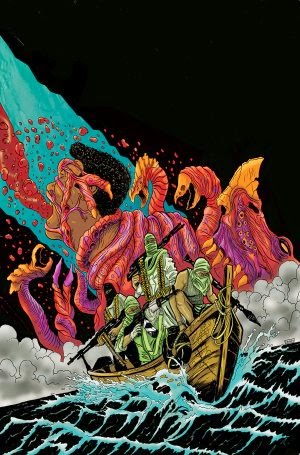 Last week's comic book reviews are late because a dog ate my homework, also my local comic shop only opened on Friday in their sensational and roomy new location. If you're in Melbourne, or are visiting some time, you should absolutely check out All Star Comics. They've even got this fabulous nook with child-appropriate comics and graphic novels, which something I often see people asking about.

Let's have a look at what I purchased last week, starting with the first issue of an all-new miniseries titled Plunder. Plunder follows a group of Somali pirates as they board a seemingly abandoned tanker ship and find unimaginable horrors onboard. It's pretty great. Our viewpoint character is Bahdoon, a teenager in way over his head. He doesn't know how to use a gun, he's surrounded by murderous bandits who aren't particularly warming to him, and the only reason he's been brought along at all is because he can translate with the foreign crews on any ships they hijack. As you might imagine, once they board their latest target the find its crew apparently missing - although there's certainly a lot of blood and weird goo on the deck.

This comic presents body horror of a style most popularly typified by John Carpenter's 1982 film The Thing, and if that is up your alley then this book will almost certainly appeal as well. I like that it features African protagonists, and the use of Somali pirates gives it a nice contemporary edge that helps it to stand out from the crowd. Skuds McKinley's artwork is a little cartoony but effective, and certainly he does a good job with this issue's moments of graphic gore and horror (of which there is quite a bit). (4/5)

While the surviving wizards continue to bicker and compete with one another, Dusty heads out with the champion Leoroyd to track down their enemies before they return. This is just an exceptional fantasy comic. Kurt Busiek is crafting what feels like a genuinely original and complex world, and the characters are gradually firming up and becoming more and more familiar. Benjamin Dewey's artwork is critical: it's more realistic and subtle than you'd normally get in this kind of comic book, and that helps sell the tone and depth that Busiek is working with here. We're four issues in and this is definitely becoming one of my favourite comics. (5/5)

Batgirl is on the run from her entire new suburb of Burnside after a doppelganger trashes her reputation and popular web app puts a bounty on her head. It's odd: one of the main selling points of this new version of Batgirl was that it was going to be a brighter, less depressing take on the character. We're only a few issues in and it already feels like the gravity of Barbara Gordon's misery is dragging the entire book down with it. There are plenty of glimmers of brightness, however, so hopefully things will bounce back. I'm loving what this book is doing for Black Canary - in fact it's making me crave a regular Canary book as soon as possible (from memory we're getting a miniseries at least around June). This issue ends with a cliffhanger that I suspect isn't half as shocking as some readers have taken it to be. (4/5)

It's impressive that, rather than simply bring Damian Wayne back from the dead, Peter J. Tomasi has elected to bring Damian back with all-new Superman-esque powers. He can fly. He's invulnerable to bullets. He's super-strong. And he's a moody, driven, excessively violent child intent on stopping crime in Gotham City. What could possibly go wrong? This issue sees Batman take Damian with him on a Justice League mission to Japan, which should prove interesting as this story progresses. I particularly liked this issue's encounter between Damian and Shazam (or Captain Marvel, but I think they're calling him Shazam now). The idea of a 10 year-old Batman and a 12 year-old inside a magical Superman analogue becoming friends is a genius idea. I hope they stick with it. (4/5)

Did it really take ten writers, artists and colourists to bring this 20 page comic book to fruition? I'm stunned. This issue serves pretty much one purpose, which is to strike R'as al Ghul off Batman's list of potential villains. We're six issues away from the end of this epic storyline, so I can't imagine we're going to have time for another tedious exercise in eliminating red herrings. The identity of Eternal's ultimate villain is pretty obvious at this stage - at least it is if you've been reading Snyder's Batman for the past three years. I really hope things pull together for the last six weeks: I think the readers deserve a good pay-off for the number of issues we've read to get there. (2/5)

The long, wobbly transition of Batwoman from solo title to weird team book continues, with the reunion of Kate Kane with her sister, the former villain Red Alice. This is just an utterly incoherent book now, failing to provide narrative drive, cohesive plotting or purpose. Four issues ago we were in space, and we're still seemingly no closer to finding out what that issue was all about at all. I think Kate is still a vampire; I don't remember her being cured, but it doesn't appear to be a plot element any more. Georges Jeanty does okay artwork, but it's in service of just random busywork. This book only has two issues to go before it's cancelled, so I'm really not sure it can be salvaged at this point. (1/5)

This is another issue that's almost entirely comprised of a single action scene. This is something at which Edmondson and Noto are very good, but while it makes for an entertaining read on a panel-by-panel basis, as a four dollar discrete issue it's a little disappointing. It's a classic sort of "writing for the trade" style that's become so common in American comic books. If they want to write that way, fine: just write a graphic novel. Some days it feels like writing the individual comic book has become a lost art. (3/5)

My favourite science fiction comic continues to impress. This second story arc kicked off with illegal sports and drug dealers - it's now graduated to terrorism, political agitation and multi-national entertainment corporations, and with it all manner of inter-jurisdictional squabbles, pissing matches and angry lawyers insisting no one talks to their clients. Justin Greenwood's loose, energetic art helps to maintain the pace of this comic, which is one of it's strengths: there's lots of plot in each issue, and the story never slows down or gets self-indulgent. It continues to be one of my absolute favourite comics. (5/5)

Molly and Mal's date has been entirely disrupted by their being transported to an alternate dimension of dinosaurs and carnivorous plants - and they've only got a cranky magical bear-lady for company. Back at the camp, their friends struggle to win the 'mundane' badges they've been putting off working towards for months. There's such an infectious, breezy sense of fun about this book. It's remarkably silly, but it also has a weird sort of indie-comic punk-rock edge to it. It's impossible to read without smiling. I adored it; there's something about this new storyline, with Molly and Mal's understated romance, that's really enjoyable. (5/5)

This glacial, aimless run of Miles Morales continues. I think I'm done; much as I adore the character, this book is too slow and pointless for me to justify spending the money on it every month. With the end of the Ultimate Universe on the horizon this seems like a good arc to finish up on and move away. This issue does finally connect back to a cliffhanger ending from, what? Four issues ago? I simply find it hard to care any more. David Marquez's art is stunning - I just wish he was illustrating a more interesting comic. (2/5)

A single-issue Valentines Day special sees Kamala sneaking off to a high school dance, which has been crashed by Loki of Asgard. It's the sort of issue best described as "cute": the funny bits are funny, and it's neat to see Kamala face off against one of the Marvel Universe's more famous antagonists, but it's hardly a must-read and is easily skipped. After the dull tedium of Miles Morales, however, it was quite the palate-cleanser. It's a minor issue for a great comic, but it's still a great comic. (3/5)

Grant Morrison's strange pseudo-miniseries continues with this story of a Superman raised by Nazis fighting against a re-imagined Freedom Force. It's a broadly entertaining issue, that actually manages the odd feat of making Kal-El a believable Nazi but at the same time conflicted enough to show that, deep down, he's still a Superman we can recognise. Jim Lee's artwork is great, as always, although I assume he was running close to the wire in delivering it because it took four inkers and two colourists to get it completed in time. I'm still not sure where things are all going with this series: it's like a bunch of intriguing first issues without any proper resolution to them. (3/5)

Charles Soule's lawyer-centric take on Jennifer Walters, aka She-Hulk, comes to a screaming halt with this oddly rushed final issue. A farewell essay on the final page claims that these 12 issues were all that Soule and Marvel planned to do, but I smell a bit of a rat. The mysterious "blue file" arc that has tracked through this entire series is wrapped up in so few pages that it gave me a sort of reader whiplash - given the quality of the rest of this storyline I think we deserved something better. This isn't a bad issue by any stretch, and I'm sure we'll see She-Hulk again soon, but the feeling I got the most form this was the sense I had been short-changed. (2/5)

Galactus is here! It was probably a foregone conclusion that a Silver Surfer comic book would eventually come around to featuring his former planet-eating master. I just wasn't expecting it this soon. It's all pretty great stuff. Dawn is still horrified by Norrin's past as Galactus' herald, and there's no time for Norrin to make excuses or amends because Galactus has arrived at the sanctuary planet's front door. This is fast, energetic pulp comic book storytelling at its finest. The scripting is good, the artwork eye-poppingly bright and simple, and the scale enormous and cosmic. This is such a great book: I look forward to a new issue every month. (5/5)