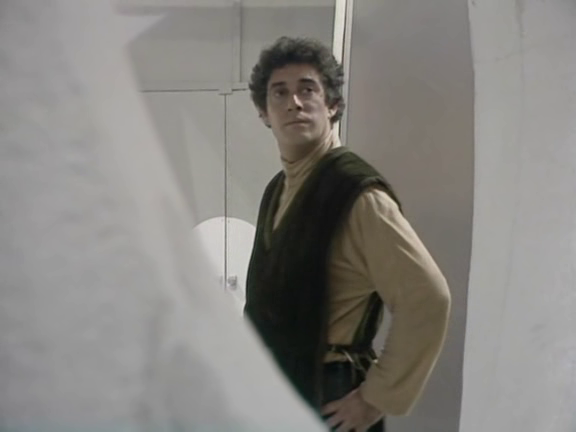 In the far future, the human race has colonised countless planets across the galaxy. Humanity is controlled by the Galactic Federation, a totalitarian regime that keeps its population under control with a combination of narcotics, propaganda and police brutality. On Earth, an unsuspecting Roj Blake (Gareth Thomas) is persuaded to attend a secret political rally. There he learns that he used to be a major political agitator on Earth, before the Federation forced him to recant his position and then altered his memories to remove any chance of him taking up his political causes again. When the rally is ambushed by Federation soldiers and its participants slaughtered, Blake is desperate to see justice done - only he's now under arrest, framed for crimes he didn't commit, and sentenced to be exiled for life to the penal colony planet Cygnus Alpha.

I have an inordinate fondness for Blake's 7, a science fiction drama created by Terry Nation and produced for four seasons by the BBC. It's an odd show in many respects. It replaced a police drama, and thus inherited its budget. BBC management was apparently unaware that science fiction action series required a much larger budget than an urban police series, and even when this was pointed out to them they refused to budge. As a result it's about as cheaply made as television drama tends to get. It also inherits much of the heightened performance styles and theatricality of 1970s British drama, and combined with the low budget that gives it a sort of slightly silly, rather camp charm. It also has a remarkable cynicism to it, and - thanks to its script editor Chris Boucher, who rewrote much of the dialogue - a very strong line in snarky wit. When I was a child, and even with much of the subtlety and cynicism of the series going completely over my head, Blake's 7 was my favourite television series in the whole world: more than Astroboy, more than Doctor Who, more than anything. Even today, nearly 40 years after it was first broadcast, it's still one of my absolute favourites.

Perhaps in keeping with the slightly odd nature of the series, "The Way Back" makes for a rather odd first episode. The series was commissioned by the BBC series department based on a verbal pitch, rather than a completed pilot script. Generally speaking, a pilot script aims to demonstrate the style and tone of a series before it is picked up. Since Terry Nation had a contract to write 13 hour-long episodes before he even started to plot out the first one, this usual requirement went flying out of the window. There was no requirement for "The Way Back" to reflect the series as a whole, and as a result it really stands out as one of the more unusual science fiction pilots ever made.

For one thing it doesn't even bother to introduce half of the cast. The series starred Gareth Thomas as the grim, rather driven Roj Blake, and this first episode is based almost entirely around him. Two other regulars, the smuggler and pilot Jenna Stannis (Sally Knyvette) and the cowardly thief Vila Restall (Michael Keating) get a brief introduction. The other three regulars are nowhere to be seen.

Thomas does a superb job as Blake, and I've always felt he was rather underrated in the role. He has a near-impossible job of making a heroic, noble, near-flawless character interesting, and to a large extent he overcomes the limitations of the character and delivers something very watchable indeed. Knyvette and Keating are similarly solid, although it's a sign of how much Terry Nation made this series up as he went along that in this episode Vila acts and talks very differently to how he will from episode 2 onwards. He's jumpy here, but he isn't yet an out-and-out coward.

The rest of the series will be spent flying around the galaxy in starships. This episode is wholly set on Earth, within the coddled, manipulated society that the remainder of the series will be spent attempting to overthrow. As a result it's touchstones and inspirations seem markedly different to the series overall: less Star Trek and The Dirty Dozen and more Nineteen Eighty-Four and Brave New World. Interestingly, once you take Blake's imprisonment out of the frame the bulk of the episode is a neatly constructed political thriller, in which a public defender (Michael Halsey) slowly uncovers a government conspiracy to falsely convict a political opponent. That this thriller ends with the defender dead and the political opponent on his way to a life in exile is one of the respects in which "The Way Back" seems exactly like the series it's launching. This really is a quite dark and comparatively bleak series when it wants to be.

Altogether this is an unusual, and rather grim, premiere. It's clearly had a bit more cash thrown at it than later episodes (the producer assumed the BBC would realise the error of their ways and give him more money for the remaining 12 weeks - they didn't), and that helps ease a modern viewer into what is unavoidably a rather old-fashioned and dated bit of TV drama. I honestly think it still works. The humour that the series will come to rely on to leaven its bleaker elements isn't here yet, but as a piece in its own right it's a marvellous beginning.
Posted by Grant at 9:01 AM