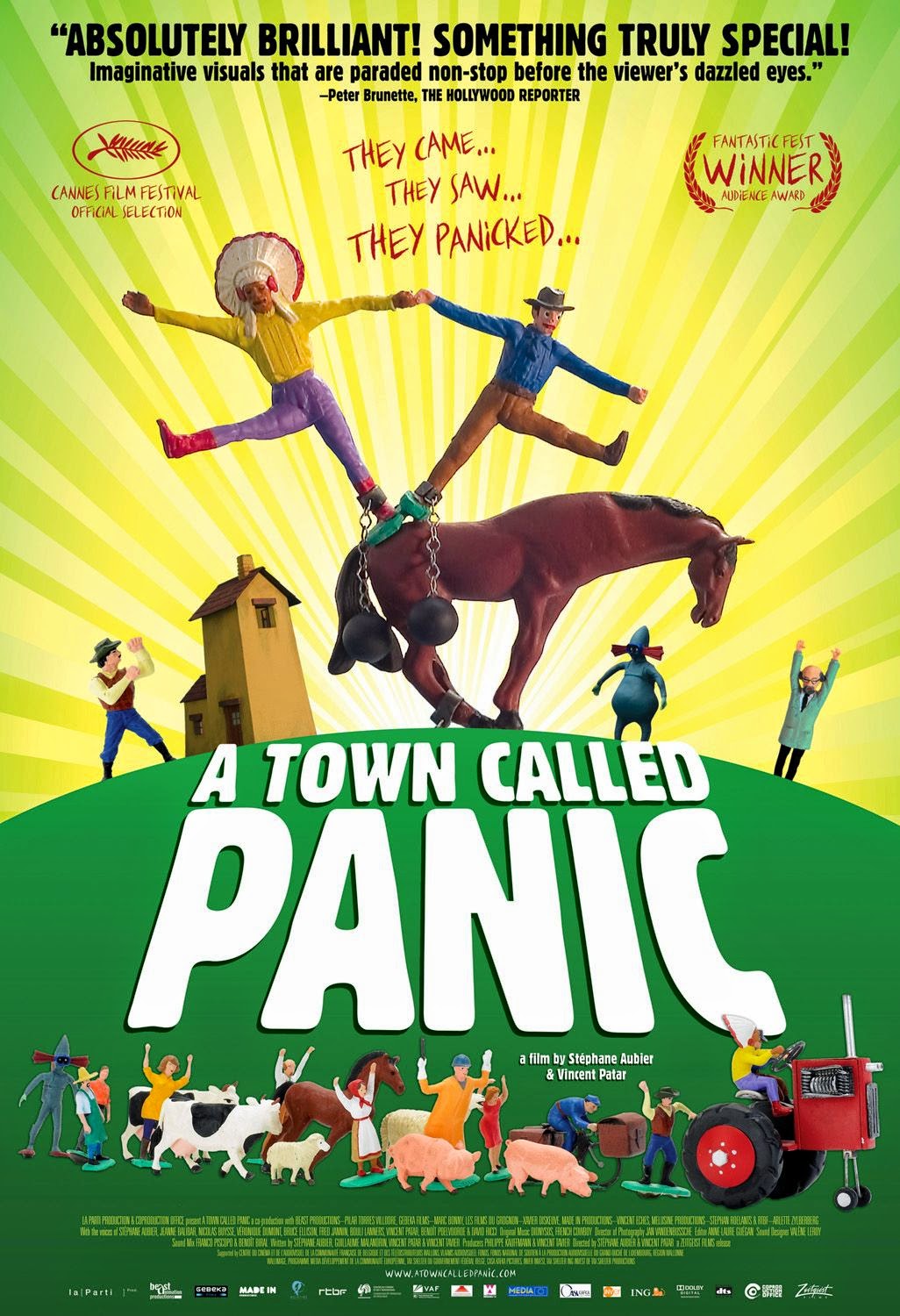 A Town Called Panic is a 2009 stop-motion animated film directed by Stéphane Aubier and Vincent Patar. It is a spin-off from the popular Belgian TV series of the same name, which was produced in 2000. There are a lot of other animated and comedy shows I recognised in A Town Called Panic. It felt a bit like The Magic Roundabout, also The Mighty Boosh, South Park, and that plasticine-based cartoon from the late 1970s, The Red and the Blue. It reminded me of a lot of other things, but more than that A Town Called Panic also felt kind of unique. It’s like those other shows in that strange way in that each of those shows don’t feel like any other shows. Does that make a lot of sense? Probably not. That’s OK, however, because neither does a A Town Called Panic.

Horse, Cowboy and Indian – they’re played by small children’s toys of a horse, a cowboy and an indian – live together in a house in the two-house village of Panic. The other house is owned by a farmer who shouts all the time with a herd of animals who take music lessons from another horse who lives in the next town. When Cowboy and Indian discover it is Horse’s birthday, they decide to build him a brick barbeque as a present. They order bricks over the internet, and an unfortunate typo sees them accidentally receive 50 million bricks. They try to hide them from Horse by balancing them on the roof, which only serves to demolish their house, and when Horse tried to rebuild the house, he finds the walls keep getting stolen by fish people.

That’s about the first 20 minutes. There’s another 50 minutes after that, which involve journeys to the centre of the Earth, more fish people, parallel universes, mad scientists and snowball-throwing giant robots shaped like penguins. If that doesn’t sound like your kind of movie, I think you need to loosen up a little in your life and watch a wider range of movies.

Yes, this is ostensibly a children’s film, and yes it’s one made with scrappy stop-motion animation using toys, cardboard and plasticine, but it’s also a scrappy stop-motion toy and plasticine-based children’s film that was deemed so good it became an official selection at the Cannes Film Festival. It’s got an unusual edge to it. As I’ve said, it’s ostensibly a kid’s film, but I say ostensibly because most children’s films don’t include a farmer getting drunk and threatening to glass a milkman for dancing with his wife. And when I say that, it sounds like A Town Called Panic is completely unsuitable for children, and to be honest I’m not entirely sure it is entirely suitable. Of course it’s in French with English subtitles, so I’m not sure how many small children are likely to watch it. The dialogue comes hard and fast, so it’s often a challenge to read the subtitles in time.

The film is centred on three great characters. They basically fall into the standard comedic cliché. There’s Horse, who is the laconic, dependable one, and then there is Cowboy and Indian, a comical, irresponsible and foolish double-act. Cowboy and Indian accidentally create trouble, and Horse then has to lead them to safety. It’s a cliché because it works, and there’s something oddly loveable about a chatty, relaxed horse and a hyperactive, panic-prone pair of Wild West stereotypes in toy form. I was also delighted by Stephen, the farmer who lives next door and angrily shouts at the top of his lungs all the time, whether he’s actually angry, asking for a cup of coffee or telling his wife he loves her.

The design work is delightful as well, particularly the odd little cars and planes that are used from time to time, and the unusual furniture and scenery throughout the film. The characters themselves are toys, they don’t look exceptional at all, but the world they inhabit looks brilliant.

A Town Called Panic is one of those films, and I have actually tested this, that you can just start playing in front of someone and within 60 seconds they’ll be grinning like an idiot. They won’t stop grinning for 70 minutes. It’s simply that entertaining. It’s funny. It’s original. It’s got snowball-throwing robot penguins. What else could you possibly want in a movie?
Posted by Grant at 9:00 AM