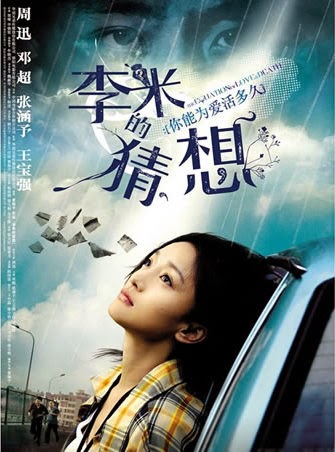 In the Chinese city of Kunming, a chain-smoking taxi driver named Li Mi (Zhou Xun) is obsessed with her mysteriously vanished fiancée. She questions her passengers about him one by one, runs strings of numbers in her head. Everything about him she keeps in a scrapbook on the passenger seat. When she unsuspectingly picks up an inept pair of drug dealers, her life is thrown further into disarray – and drawn face-to-face with a man who may or may not be the lover she lost so long ago.

Ignore the overly pretentious title – the Chinese title of the film translates as Li Mi’s Guesses – and believe me that this is an absolutely superb film. The Equation of Love and Death is a wonderfully off-kilter, quirky black comedy. While it does lose momentum during its second half there’s nonetheless enough here to keep you well entertained.

It is the second film by writer/director Cao Baoping, and follows his 2006 debut Trouble Makers. As far as I'm aware he hasn't made another film since.

The first half hour or so are brilliantly written and directed, establishing the characters quickly and piquing the audience’s interest. There’s a very Tarantino-esque vibe to the piece, not because the film is particularly violent (it isn’t) but because it has such a shambolic and laid-back love for dialogue. It does not fully matter that the plot does not rocket along, because there’s so much satisfaction to be had in observing Baoping’s characters interact. The film certainly makes a glorious contrast from the sword-fighting historical epics most commonly available for Chinese cinema viewers overseas.

Whatever its other merits may be, The Equation of Love and Death belongs to its star, actress Zhou Xun. The film is worth checking out solely on the strength of her performance. She delivers a knockout turn as Li Mi, somehow combining weariness, boredom and focused desperation all at the same time. Add in her striking appearance and distinctive husky voice, and she’s an actress you can’t take your eyes off. You may have seen her before – she was in Beijing Bicycle and Cloud Atlas. She’s long been very well regarded in the Chinese film industry – with a performance this stunning it’s not difficult to understand why.

This was a movie I saw on an aeroplane. International long-haul flights are a godsend for foreign movie fans. It's not just because you've got hours and hours to fill with a video screen a foot and a half in front of you, it's because very often the foreign films screened on airlines turn out to be maddeningly difficult to track down on subtitled home video. Make sure you've got enough time to watch the whole film before you land, because you might be stuck having half-watched a great movie for a long time.
Posted by Grant at 8:20 PM