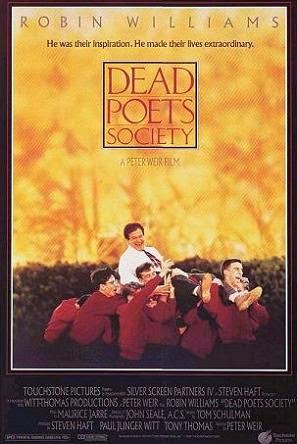 It wasn't intentional, but for some reason in recent weeks I keep finding myself watching movies directed by Peter Weir. He's possibly the most talented Australian director of all time. No, not possibly, he is our greatest-ever film director: incisive, inventive and thoughtful.He works at a fairly slow pace - since 1980 he's averaged one film ever three years - but his films are uniformly excellent. There aren't many directors you can point at and claim they have never directed a bad film. I honestly believe Weir is one of them.

One of the films I watched recently was Dead Poets Society, a 1989 drama written by Tom Schulman. In an elite American prep school, a group of teenage boys have their lives changed with the arrival of their new English teacher John Keating (Robin Williams). One boy in particur, Neil (Robert Sean Leonard), is enboldened to push back against his pressuring father and finally dictate his own future.

It would be relatively easy to dismiss Dead Poets Society. It has that nostalgic vibe you get in a period piece. It follows young men through a critical phase in their lives, as they move towards adulthood, start following their own dreams and chasing after sex and romance in a big way. It's got Robin Williams in a very big, theatrical role. He struts and quips and jokes around. He makes his students laugh and fills their minds with easy-to-digest ideas of independent thinking and resistance to authority. Then you start picking at the film's details, and really taking a look at its narrative choices, and it becomes apparent just how good a film this is.

For one thing, it doesn't have a happy ending. It almost gives us one: it provides us with every story point we need to get to a safe, predictable and heartwarming conclusion. Then it snatches that possibility away at the worst possible time, leaving its character flailing helplessly in its wake. It is also constructed perfectly as a classical tragedy, since it carefully leaves Neil every chance to find himself a happy ending if only he'd make the right choices. He doesn't.

One of Weir's great gifts as a filmmaker is how he draws performances out of actors. Robin Williams is outstanding here. His scenes teaching the boys are almost throwaway, really; it's the sort of zany hijinks that Williams can do in his sleep. It's in the other scenes where he excels, in conversation with his teaching colleagues, or talking one-to-one with Neil. One scene in particular, towards the film's conclusion, is just Williams overcome with grief in a room. It's possibly the single-best bit of acting he's ever done.

Weir draws beautiful performances out of his young cast as well, particularly Robert Sean Leonard as Neil and a startlingly young Ethan Hawke as his roommate Todd. Also impressive is Josh Charles as the wilfully romantic Knox Overstreet, although his subplot veers horribly into stalking behaviour when we're clearly supposed to be siding with him in wooing a pretty girl. It's the film's one major misstep. I also really appreciated Kurtwood Smith as Neil's bottled-up, authoritarian father. It's a character that would be easy to play as a cliche, yet Smith imbues him with enough humanity and thought that he's almost sympathetic. I sided with Neil, but by the film's end I felt so sorry for his father.

As I said, it would be easy to dismiss Dead Poets Society. That would be a terrible mistake.
Posted by Grant at 10:18 AM