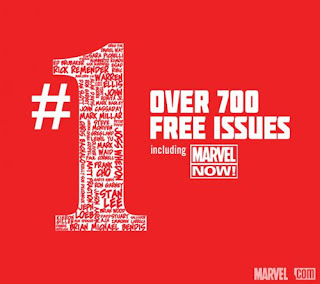 So over the weekend Marvel and Comixology undertook a remarkably popular stunt, in which 700 first and single issues from the entire history of Marvel Comics were made available to download for free via Comixology's website and apps. It's a great idea in principle, allowing potential new readers to sample the entire breadth of Marvel's back catalogue. In practice, however, both companies should have seen the end result coming.

Comixology crashed hard, with clients unable to download any comics for several days, whether they were free or paid, or from Marvel or one of Marvel's many competitors. DC, for example, must have been furious to learn that a Marvel sales stunt actively prevented DC from selling its own comics. The crash also prevented customers from reading any of the titles they had already purchased but which had not been downloaded to their tablet or computer.

This incident, which seems to have settled down (I managed to download some stuff yesterday) showcases the very real problems facing digital comics: storing your purchases in a cloud rather than downloading a discrete file, and allowing a single company to near-monopolise the digital comics market. The former issue is a very real one for customers of the website JManga, which announced this week that it is to shut down, removing its customers' access to the titles they purchased at the same time. Digital consumers may be paying for comics, but more often than not they're not actually purchasing them, and that's an issue that needs to be fixed sooner rather than later.

In this second issue of Marvel's big new "event" comic, we get a little more backstory as well as a glimpse into life over in California, where Black Widow and Moon Knight are holed up in one of Nick Fury's old safe houses. This second issue definitely lacks the punch of the first: not enough happens, and it lacks the impact of last week. It also pretty much negates last issue's wonderfully effective cliffhanger: Captain America goes from curled up, despairing victim to "last hurrah" motivating leader in the space of one conversation. You know what? Screw you, Captain Rogers. You had your chance and you wasted it sitting in the corner. I vote for Hawkeye to lead the team. (3/5)

Ray Fawkes continues his two-issue fill-in for writer Gail Simone, and given this is the issue where Barbara learns Damian Wayne has died I kind of wish Simone had written it. We get a tiny note of sadness, but it's pretty much over within a page or two and doesn't really affect the rest of the issue. The bulk is taken up with the continuing mind games James Gordon Jr. is playing on his sister. This two-issue segue into another writer has really thrown this book out of phase. I want to like it a lot more than I do, but basically I just want Gail Simone to come back. (And she is - hurrah!) (2/5)

Batman continues to mourn the death of his son, while once again encountering Harper Row - the idealistic young woman who has been following him around for the past few months. It's a fairly safe assumption that if your day includes punching a teenage girl in the face and breaking her nose, you're probably not coping with your son's death very well. It's an excellent, very solid read, but I'm getting a little worried about Harper Row. She's being fairly obviously set up as the next Robin, and I love the idea of her becoming Batman's sidekick. My worry is that DC also got me excited about Stephanie Brown and then screwed her over. They got me excited about Cassandra Cain and then screwed her over. I'm not sure how many times they can screw over a brilliant female character and still make me excited when they set another one up. (4/5)

This is one of those comics that hits you like a punch to the guts. It's a 20-page entirely silent act of rage, grief and raw, scarred emotion. Bruce Wayne's son is dead, and he's understandably not coping. This is, to be honest, the Batman comic people should have received first this month - ahead of Batman and ahead of last week's Detective Comics. It's as effective a coda to Batman Incorporated #8 you could imagine, and its final pages are just heartbreaking to read. With no dialogue in this issue there's more pressure on Gleason and Grey to perform than usual, and they excel themselves. It's beautiful, and it's horrible. I may have cried a little. What particularly impressed me were the little details at the comic's beginning: it turns out Damian was a talented artist, and that he had a list of recommended movies to watch from Clark Kent. Stuff like that, that fleshes out Damian's character after the fact in the most heart-breaking of ways. (5/5)

I'm worried that this review is going to make me sound stupid, but here goes: Change ends after four issues, and I still don't quite know what the hell it is I just read. It made a wonderful impact, and made an emotional kind of sense, but as for the actual nuts and bolts of the plot I'm turning up empty. Who knows? All I can tell you is that it was inventive, and evocative, and consistently interesting, and I really can not help you in regards to what it was all about. (4/5)

Let's be honest: in February DC managed to sell an estimated 13,500 copies of Demon Knights. The book is losing just under 800 readers a month - at least in print form - which gives it until July before it's selling less than 10,000 copies per issue. In short, this current storyline is likely going to be Demon Knights' last. Its failure to find an audience really is a tragedy: it's one of the most original concepts for a DC superhero book, it finally found a good use for Etrigan the Demon, and both Paul Cornell and Robert Venditti have written the hell out of it. This issue sees the team finally reunited as they set off to save Themyscira from a vampire invasion. Bernard Chang's art is great, and I'm absolutely loving the snarky comments from Sarah's horse. (4/5)

Two months ago I got remarkably excited about Batman #16, because Batman punched a horse. What could be more badass than Batman punching a horse? Robert Oppenheimer punching a horse, that's what. This issue, featuring guest art by Browne and Bellaire, follows up directly from Manhattan Projects' very first issue, in which Robert Oppenheimer's brother Joseph tracked down his brother, ate him, and masqueraded as the noted physicist to gain access to the Projects. (It's that kind of a comic.) This issue follows up on Robert's consciousness as he travels across his brother's psyche. Imagine the more interesting bits of The Matrix Revolutions played out by 20th century scientists and you'll be pretty close to the mark. It's got a very clever cover as well, that only makes sense after you've read the book. (5/5)

This issue we get a healthy dose of Darth Vader, Han Solo and Chewbacca, and Luke, Leia and the rest of the X-Wing squadron. There's a wonderful sense of play here: rather than find some new angle or take on the Star Wars mythos, Wood has diven headlong into it. He's joining the dots between the original trilogy's films and making a phenomenally entertaining read out of it. He is also doing a remarkably good job of treading that line between Luke and Leia fancying each other (which they clearly do) and Luke and Leia being brother and lister (which they don't know yet). Oh well. It worked out okay for Cerce and Jamie Lannister I suppose. By the way, don't be fooled by the cover: Ben Kenobi does not appear. (4/5)

Esad Ribic sits this month out, which isn't a surprise: his artwork is so painterly and detailed that it must take him more than four weeks to complete each issue. Butch Guise and Tom Palmer do a great job of filling in, however, helping Jason Aaron reveal the backstory of Gorr the Godkiller. I have to hand it to Aaron: only six issues in and he's absolutely cemented a new villain for Thor that I can easily see hanging around for years to come. In many respects, Thor: God of Thunder is the best kind of superhero comic. It is respectfully building on what has come before, while introducing new elements for future writers and artists to play with. (5/5)

This issue is a remarkably light-hearted affair, with David infiltrating a cult of anti-mutant bigots while evading the attention of an alien civilization that's intent on hunting him down. There's a lot of humour being brought to the table, and all up this issue feels like a pleasant throwback to some of the better comics of the 1990s. I like that this issue has built up a romance between David and fellow mutant Blindfold: developing a strong set of supporting characters will be key to sustaining the book in the long-term. (3/5)