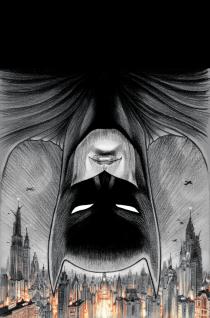 Chip Kidd is one of the USA's best graphic designers: his layouts and designs for book and comic covers have been consistently outstanding, and he remains one of my favourite artists currently working in that field. He is a self-avowed comic book geek, with a passionate love in particular for Batman. Death by Design is, as far as I'm aware, his first graphic novel. He wrote it, with artwork by Dave Taylor.

The book focuses on Gotham City's iconic train station, an architectural icon paid for by Dr Thomas Wayne and whose son Bruce (aka Batman) is now responsible for its demolition. Competing architects fight to produce the winning design for the station's replacement, while one woman personally lobbies Bruce to keep the original building standing. Enter a string of random industrial accidents, a mysterious masked man warning of disaster and Gotham City's notorious criminal the Joker: Batman is on the case.

I love that Kidd has written what is effectively a thriller about architecture: design and construction is central to the book's narrative, and several of the key characters are architects. The book is set in an undefined past: there's a sort of 1940s vibe about the entire book that really works. It reminded me at several points of DC's excellent Sandman Mystery Theatre, which is no bad thing.

Kidd writes Batman with a surprising amount of thought balloons - you really don't see those any more in comic books. Not only does it add to the book's retro vibe but it also gets into Batman's mind in a way you don't usually see any more. He writes a pretty old-fashioned Joker as well, who's more of a deranged theatrical criminal than the terrifying psychopath he's been portrayed as since the 1980s.

Dave Taylor's pencilled art is outstanding. He takes the architectural theme of the book to heart, giving each panel some beautiful art deco design. Everything in the book is beautiful: the buildings, the cars, the furniture - even the people. His characters are richly drawn and expressive.

This is a valuable addition to the broad range of Batman graphic novels, providing a fresh perspective and an original look. It's absolutely worth checking out and - being a Chip Kidd book - is beautifully designed and packaged as well.
Posted by Grant at 2:21 PM