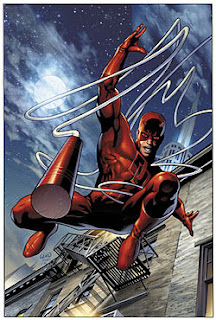 What are the must-read superhero comics of the moment?

Let's say you're on a limited budget. You've only got the cash to afford US$25.00 a month on superhero comics, and you want the very best that you can buy. At the moment I think you want to be buying six comics. Three from Marvel, and three from DC.

From Marvel you need to be buying Matt Fraction and David Aja's Hawkeye. It's just astoundingly entertaining and, with its Chris Ware-inspired small panels, a surprisingly good value read. Secondly, I can't recommend Mark Waid's run on Daredevil enough. He's pitching the perfect balance of dark and light elements with great art by Chris Samnee. For a third Marvel book I think you should look to something by Brian Michael Bendis. Depending on your superhero tastes, that means either All-New X-Men or Ultimate Comics Spider-Man. 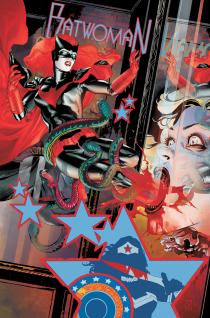 From DC you first need to be reading Scott Snyder and Greg Capullo's excellent run on Batman, easily the must-read book of the New 52. Secondly, J.H. Williams III and W. Haden Blackman have done wonders with Batwoman: it's an artful, stylish masterpiece each and every month. Finally, Brian Azzarello and Cliff Chiang's Wonder Woman is - after a controversial start - turning into a fabulous modern-day take on Greek mythology. It's highly reminiscent of Neil Gaiman's The Sandman, and has a wonderful complex plot with plenty of intriguing characters.

That's my limited budget recommendation for superhero books: Hawkeye, Daredevil, Batman, Batwoman, Wonder Woman and either Ultimate Comics Spider-Man or All-New X-Men. What does your recommended list look like?

The young Scott Summers meets Mystique while he ponders whether or not to confront his older self. Great dialogue from Bendis keeps this book entertaining and fresh, while guest artist David Marquez does a seamless job of filling in for Stuart Immonen. The book's got a great cover too. I think the X-Men work best when they're written as a glorified super-powered soap opera, and Bendis is certainly bringing the requisite amount of angst and interpersonal conflict. Another appealing factor is my complete ignorance of where this book is headed: can Bendis really change the history of the Marvel Universe? (4/5)

Okay, so Buddy Baker (aka Animal Man) discovered that his powers were linked to "the Red", and that "the Rot" was trying to take over the world, and that his daughter was key to the future of the Red. That took five issues. Then after a one-issue segue, the Baker family went on the run from the Rot for another five issues. Then we hit the actual "Rotworld" story arc, which has continued for another six damn issues, and after all of that slow, meandering, glacial plot, it turns out the finale can only be read in the pages of Swamp Thing #17. This is the last issue of this comic I shall be buying. (0/5)

This issue does a great job of tying together a couple of plot threads together into a mini-climax. David Zavimbe is having a pretty rough time of it: last issue he arrested the criminal son of one of Africa's richest men, so now he finds himself targeted not only by a team of super-powered mercenaries but also by his fellow police officers - most of whom are on the take and deeply corrupt. Then there's the issue of collatoral damage: his primary support, the eyepatch-wearing Matu Ba, has become a target as well. I've been generally digging Batwing since it started, and I think this one of the best issues published. It's tightly plotted, well written and drawn, and does a great job of using the African setting without feeling tokenistic or unrealistic. Sales of this book are getting dangerously low, so I hope a few more people consider picking this up: it's great stuff. (4/5)

Ben Urich continues to investigate the death of the Daredevil, and comes face-to-face with the incarcerated Frank Castle. This book has been a slow build, but as we enter the second half (it's an eight-issue series) things are finally beginning to fall into place. This is becoming a great future vision of the Daredevil, with a lot of elements that are reminding me of The Dark Knight Returns. Obviously this is unlikely to be as iconic a miniseries, but once collected together I can see this becoming a perennial seller for Marvel's trade paperback range. It's an admirable combination of talent that's really working wonders. (5/5)

Batman continues to track down the Merrymaker and his gang of Joker-inspired criminals. After last issue's introduction, I assumed that the Merrymaker storyline would run and run. Instead it's mostly wrapped up here, with some intriguing loose ends (and a great back-up strip) to follow up on down the road. This book has improved so much since John Layman took over writing it, and Fabok's art is rock solid. Actually I do have one other thing to mention: this book has exactly what I want in a back-up strip. It's a self-contained short story that picks up on characters and elements from the main strip and expands them a little. This is so much richer and more interesting that getting Shazam at the back of Justice League or random fantasy serials at the back of Sword of Sorcery. (4/5)


Marvel Comics. Written by Cullen Bunn. Art by Will Sliney.

Another week, another new comic for Marvel Now. I'm losing track of the team books Marvel is publishing as part of this relaunch, and struggling to tell the difference between the Fearless Defenders, the Avengers, the Uncanny X-Force, the Secret Avengers, the Thunderbolts, the New Avengers, the Young Avengers, Cable's X-Force, X-Factor, the X-Men, the Uncanny X-Men, the X-treme X-Men or the Astonishing X-Men. This book, in which Valkyrie is assembling an all-female fighting force, doesn't really do anything of note to stick its head up from the pack. It also has quite a bit of back-breaking character poses - aren't we over those by now? Also is it just me or has the Marvel Universe become ridiculously red? (2/5)

Not only does Chas Worthington have a giant octopus to cope with, he's now also paired up with a French mercenary while a strike team invades his base camp. While I'm still enjoying Great Pacific, it does feel like it's already hit a bit of a creative slump. One of its most significant problems is its setting: there's only so much you can do to make an orange-brown ocean of garbage look visually interesting. I am a big fan of the octopus though, and I hope the book keeps him around. Things get nicely complicated at the issue's end as well, so I think issue #5 might be a lot better. (3/5)

For the third issue in a row, Human Bomb continues to be an entertaining, uncomplicated read. In some ways it's so generic it hurts, but the fact is this should be what an average superhero comic is like - unfortunately even at this level it's head and shoulders above a lot of what gets published. I do really like Jerry Ordway's artwork. It's easy to understand, unassuming and nicely proportioned. I hope once this miniseries ends in March DC find a regular book for Ordway to work on. (3/5)

Oh the puns. The terrible, terrible puns. I've adored each issue of Multiple Warheads enormously, but for some reason - probably the terrible puns - this final instalment doesn't pack quite the same punch. It's still very enjoyable and inventive stuff, but for some reason it just doesn't quite excite me as much this time around. I'm still glad to see that a second miniseries is due in about a year's time, since there's no limit to the creative stuff Graham can do with this setting and style. I await it with eager anticipation, as well as the hope it will have slightly fewer puns. Terrible, terrible puns. It was punishing, I tell you. (4/5)

The Marvel Universe is getting ridiculously red! Five issues into this re-vamped book (it used to be Red Hulk, now it's about his daughter) and I'm an complete convert. Jeff Parker is writing a brilliant and interesting take on Betty Ross and her android sidekick Machine Man. If that wasn't enough, the final pages introduce the original green She-Hulk to the book. I really, really hope she sticks around for a whole. A book with two She-Hulks for the price of one is a must-buy. (5/5)


DC Comics. Written by Peter Milligan. Art by Will Conrad.

The Engineer and the Eminence of Blades continue their violent takeover of Stormwatch, while Apollo and Midnighter go on the run in regional Western Australia. While Peter Milligan is writing a vastly improved and gripping book at the moment, my previous criticisms still stand: we're 18 months in and as far as I can tell this team has done nothing but fight its own members. If they can't start fighting more external enemies soon then what is the point of this book even getting published? (3/5)

Bendis has got this book impressively back on track with the first meeting between Miles Morales and Venom. I've never seen the Ultimate Universe Venom before. He's huge. I love the difference in scale between this oily, tentacled monstrosity and the tiny nimble figure that Miles cuts. Plus, in true Spider-Man fashion, Miles' actions manages to create a sudden personal tragedy. I can not wait for the next issue. While it meandered a bit during the recent crossover issues, this is back on target with whipcrack speed. (5/5)

After that bizarre segue back to the Huntress miniseries last month, we're back on track with a little more backstory on how Power Girl and Huntress settled into their lives on the new Earth, and a further progression on their hunt for Michael Holt's elusive technology that may just get them home. Like Batwing this is solid, reliable comic entertainment. (3/5)

Winner of the Week: While Ultimate Comics Spider-Man is great this week, I'm going to spread the wealth and give the prize to Red She-Hulk. This is the biggest surprise of Marvel Now.
Loser of the Week: Animal Man can just go away.
Posted by Grant at 10:22 PM