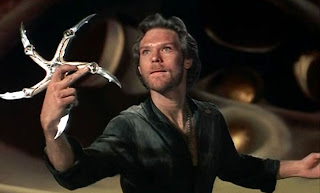 Krull is a weird movie. It was original going to be titled Dragons of Krull, but then Disney and Paramount's Dragonslayer flopped, so a risk-averse Columbia Pictures retitled it to just Krull and added in some laser beams. They didn't add any actual science fiction per se, they just gave the monstrous Stalkers some laser rifles and set them on our heroes - who all use axes and swords.

So there's a kingdom, and a prince about to marry a princess, only the princess is captured by a Beast (capital letter intended - he doesn't seem to have a name or a real purpose, he's just "the Beast"). The Prince sets off to rescue her, accompanied by a Ben Kenobi analogue, a blind wise man, a wizard with the power to turn himself into a duck, a cyclops who blinks precisely once after every line (it's hypnotic), a gang of mercenaries, and a young Liam Neeson.

Krull essentially consists of some production design, a few models by James Bond whiz Derek Meddings, and a string of action and fantasy scenes as the heroes try to locate the Beast's constantly teleporting castle. Some of these scenes are rather trite and dull. Some (such as Freddie Jones' perilous journey to visit the Widow of the Web) are quite wonderful. Overall, however, it simply feels like the film is running in circles until it's run for 120 minutes - and then it can end.

There are some great actors buried in here - Freddie Jones, Liam Neeson, Robbie Coltrane, Francesca Annis - but they're headed up by two very unengaging leads. Ken Marshall (later to play Commander Eddington in Star Trek: Deep Space Nine) is the worthy but dull Prince Colwyn. He stands out a mile because not only is he the hero, he's also the only character to speak with an American accent. Lyssette Anthony plays his kidnapped bride to be, only she's been dubbed over by another actress for some reason. They were big on that in the early 1980s, and I've never worked out why.

The early 1980s was a time of wonderful sword and sorcery films, such as Conan the Barbarian, Dragonslayer and The Dark Crystal. It was also a time of some quite dreadful ones, including The Sword and the Sorcerer and Red Sonja. Krull sits somewhere around the middle: it's got enough good bits to make it worth the watch, but enough bad bits to probably make it worth watching only once.
Posted by Grant at 10:54 AM