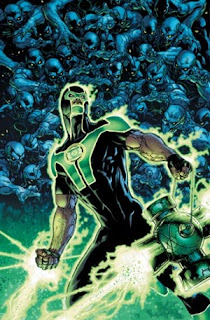 The DC Comics news that struck me the hardest this week was the complete revamp of the Green Lantern line coming in June. May 2013 sees the final issues for the creative teams on all four titles: Green Lantern, Green Lantern Corps, Red Lanterns and Green Lantern: The New Guardians. June sees... well, I suppose June will see something new.

Geoff Johns has been the creative force behind Green Lantern since 2004, when he and Ethan van Scriver worked on the Green Lantern: Rebirth miniseries which returned 1960s character Hal Jordan to the title role. Johns has been the writer of Green Lantern ever since, clocking up more than 100 issues and adding numerous new wrinkles and elements to the character and background along the way. Anyone who doesn't understand the immense impact Johns has had on Green Lantern should hunt down what I think was his high point on the title, the 2007 story arc "The Sinestro Corps War". This 11-issue epic was one of the few "events" from DC or Marvel that actually felt significant.

I hope DC have the sense to hire a new mastermind for the Green Lantern franchise. I hope they get someone really creative, someone willing to take a few risks and find a new direction for the characters and the Green Lantern Corps. I hope, but also doubt, that they have the sense to stand back and let that creator do her or his thing, and not interfere from on high. A singular creative vision revived Green Lantern in 2004, and a new vision could set it off for 2013 as well.

One final hope is that they continue to use Simon Baz (above), since he's about a million times more interesting than Hal Jordan (the one central weak point of Johns' run) and DC needs more heroes of colour.

With the Joker out of the picture (in Batman #17, yep DC shafting readers with climaxes in different books again), Barbara's focus turns to her unhinged brother James Jr. as well as the revamped New 52 version of Firebug. This book is like a lot of New 52 midlist titles: reliably entertaining month in, month out, without ever quite stretching beyond its comfort zone to deliver a really effective, ground-breaking storyline. I'm enjoying it, yet it's not reaching the heights of the previous Batgirl monthly (the one with Stephanie Brown), nor is it matching Gail Simone firing on all four cylinders (in Birds of Prey or Secret Six). (3/5)

"Death of the Family" concludes with a string of surprises and twists, albeit not any of the ones its readers were expecting. It achieves the same thing that Snyder and Capullo's earlier arc, "The Court of Owls", achieved: adding depth and nuance to the Batman mythology while still remain very true to the core elements that have made it so successful. I am particularly appreciative that this issue pulled away so decisively from the horror and gore that is endemic across the New 52, and presented something that wouldn't feel too out of place in the 1970s or 1980s. Now that it's all wrapped up, I think this was the best Joker story that DC have run in years. It also leaves the Batman "family" in a somewhat precarious position, that I expect to see developed over the coming months. (5/5)

"It was all a dream" is one of the most tedious cliches in fiction, yet here Peter Tomasi, Patrick Gleason and Mick Gray absolutely make it work with this strange, gentle epilogue to "Death of the Family". At the end of a night's crime fighting, Bruce, Damian and Alfred all retire to their respective bedrooms and get some sleep. What follows is a trio of dream sequences revealing and enhancing each character's thoughts, desires and fears. While Alfred's dream (involving shooting the Joker with a shotgun to the face) is pretty awesome, it's the depiction of the Joker as a massive white whale that impressed me the most. This is actually a fairly self-contained issue, so if you're looking for a fun Bat-book to read this week, this may be your best pick. (4/5)

Bedlam is back firing on all four cylinders after a slightly underwhelming second and third issue. This book continues to be both horrifying and gut-bustingly funny, as protagonist (and potentially ex-supervillain) Fillmore Press continues to try and help the city police track down a serial killer. This book has such a great hook: what if the Joker got psychiatric treatment and tried to help Batman and the police? The first issue was one of 2012's best single issues, and this issue comes very closely to matching the quality seen there. Riley Rossmo's artwork continues to be outstanding - he's only going to get more popular with time. (5/5)

Change continues to intrigue and confuse in equal measure. I think Los Angeles is on the verge of being destroyed by some Cthuloid horror, and the only things that seem to stand in its way are a rapper who wants to make a movie (or is the Cthuloid horror just scenes from his film?), a car thief turned screenwriter and a withered astronaut. I don't know if this makes sense: I'm not getting this book on a narrative level, but I'm digging the hell out of it in an aesthetic and emotional level. I'm also very keen to see what else Ales Kot comes up with in 2013 (including Zero and The Surface, both via Image). (3/5)

I've pretty much been taking Cyber Force for granted; it's free, I can just grab a copy from the counter of my local comic shop and read it if and when I find the time. As a result I really wasn't expecting this issue to be as interesting as it was: the first two were entertaining enough in a disposable sort of way, but issue #3 pushes the story forward in an aggressive and interesting fashion. I'm still not likely to continue reading after issue #5 (the last free one), but it's beginning to prove itself and does deserve to find a paying audience in a few months. (3/5)

Robert Vendetti is doing a fantastic job of following Paul Cornell's run, with a story set some decades on from where Cornell left off. This has allowed him to re-arrange the cast a little, and a lot of the appeal of this arc is seeing what's happened to the Demon Knights since they escaped from hell all those years ago. This is a really solid, enjoyable fantasy comic, and one that's seamlessly fitting into the DC Universe at the same time (at the moment a horde of vampires are set to invade Wonder Woman's future home Themyscira). It's a deep shame that it's doing so badly sales-wise: a new arc and writer has had absolutely no effect on readership numbers whatsoever, and Vendetti and Bernard Chang (whose art is great) deserve better. (4/5)

I have a good feeling about Katana: it's well written, has great art, is spinning off from Birds of Prey and the forthcoming Justice League of America and - mostly importantly - it's a $2.99 comic without an unnecessary back-up strip. I think all of those factors give the book a good chance to surviving past its first year - something a lot of other DC new releases haven't quite managed. The issue itself is a little opaque for readers like me, who have somehow avoided reading the adventures of Katana until now, but it's still an intriguing and action-packed story about a masked crime fighter with a magical sword possessed by the spirit of her dead husband. At this slightly lower price, I'm more eclined to continue with this than I was with Threshold - whose second issue, out this week, I decided not to bother with. (4/5)

Manhattan Projects is a book, like Bedlam, that's been a tiny bit under the weather for the last few issues. This month things snap back into the excellent form of the first story arc, with a climactic confrontation between the Projects and the Illuminati running the USA. Where else are you going to find cannibal physicists eating US Presidents to death? This is dark, twisted, utterly bizarre stuff, taking a disparate cast of real-life scientists, Presidents and astronauts and transforming it into the strangest science fiction comic on the market (okay, maybe except for Change). (5/5)

I don't I got around to reviewing Star Wars #1 last month, since I bought it a few days later than the rest of my comic book order. Basically Brain Wood is writing Dark Horse's new ongoing monthly Star Wars comic, set between Star Wars and The Empire Strikes Back. If you're a Star Wars fan, and I mean a proper "love the movies" fan and not a geeky "expanded universe" fan, this comic is a must-read. Wood has captured the tone of those original movies brilliantly, while taking the opportunity to expand and explore the cast dynamics in a way that a two-hour action movie can't afford. This issue sees Han Solo and Chewie smuggling the Alliance's money through enemy territory, a new Admiral taking command of Darth Vader's old Star Destroyer, and Princess Leia setting up a new secret squadron of rebel pilots. That's right: Princess Leia is an X-Wing fighter pilot now. The word you are looking for is "awesome". Alex Ross' beautiful painted covers are the icing on the cake. With the sale of Lucasfilm to Disney, Dark Horse's days publishing Star Wars comics are sadly numbered, but if they're going to go out then there isn't a better title for them to retire on than this. (5/5)

It feels like an absolute age since the second issue of Storm Dogs came out. This is a great third issue, diving into a solid second act with new revelations, new characters and a rapidly complicating narrative. David Hine has written an engaging blend of murder-mystery and science fiction, and Braithwaite and Arreola's art is extremely good. I actually think miniseries is one of those cases where reading it as a trade paperback with spoil the fun slightly, since the turning plot is one of its core appeals - being able to read the whole story straight through without any breaks would seem to destroy the suspense. (4/5)

Winner of the Week: Looking through the scores, this was a pretty damned good week for comic books. I'm going to crown Star Wars #2, however: this is exactly the kind of comic book the Star Wars franchise needs.
Loser of the Week: With nothing in my pull list scoring less than 3/5 this week, I'm declaring it an official "no loser" instalment.
Posted by Grant at 10:46 AM