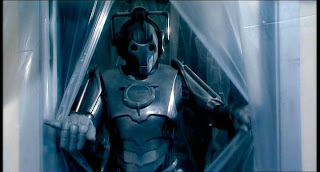 Who50 counts down to the 50th anniversary of Doctor Who by reviewing my favourite episodes and serials over the history of the programme, counting down from #50 to #1. Today, #45: "Army of Ghosts" and "Doomsday", a 2006 two-part serial written by Russell T Davies and directed by Graeme Harper.

The Doctor (David Tennant) and Rose (Billie Piper) return to present-day London to find the world is experiencing a bizarre phenomenon of ghosts visiting homes across the globe. People believe it's the dead returning to life, but the Doctor knows different. So does Torchwood, a mysterious government organisation that's been lurking in the shadows for the past 100 years.

Inside Torchwood lies a mysterious sphere, a "void ship" that has punctured its way between universes, allowing the ghosts - actually Cybermen - to breach through and invade. Nobody knows what lies inside the sphere: not the Doctor, not Torchwood, not even the Cybermen. The answer may spell the final destruction of the planet Earth.

I mentioned when reviewing "Utopia" that it had - to my mind - the best cliffhanger ending in the history of Doctor Who. "Army of Ghosts" comes close, with its last-minute reveal that it isn't just the Cybermen that the Doctor must contend with, but the Daleks as well. The sight of three Daleks levitating down from the open void ship is a stunning and quite menacing image. It's nice when the series remembers to make the Daleks scary again. All too often it just uses them as angry mobile tanks, and forgets how scary they can sometimes be.

To be honest though, the most surprising thing about "Doomsday" is actually that it took 40 years for Doctor Who to finally feature a Daleks vs. Cybermen battle on-screen. They are unquestionably the two most enduring monsters created for the series, and I don't think there was a fan in the world who didn't want to some day see the two intergalactic aggressors face off against one another at least one time. The actual face-off is unexpectedly played for comedy, and played well.

The episode also features the proper debut of Torchwood, a sort of replacement UNIT for the 21st century. Founded by Queen Victoria and tasked with fighting aliens on behalf of the Crown rather than the United Nations, it's an interesting idea that's utterly ballsed up when the dreadful, smutty, irredeemably adolescent Torchwood weekly series debuts some months later.

The thing that marks this two-part story out as one of the all-time greats, however, isn't the Daleks, the Cybermen or Torchwood. It's the departure of Rose Tyler, the new series' first and most popular companion. For new viewers, unused to the revolving door of classic Doctor Who companions (10 adventures being the average), it was unimaginable. Even for jaded old-school viewers such as myself, the departure hit like a punch to the guts.

Russell T Davies is not the greatest plotter in the long history of Doctor Who. In fact, he's actually rather terrible at it. He relies on magic clap-your-hands Peter Pan-style endings more often than not, including "The Last of the Time Lords" which genuinely featured a magic clap-your-hands Peter Pan ending. There's a similar ending slapped in here that tidies up annoying plot threads a little too neatly and easily. Easily, that is, until Rose loses her grip and goes flying into the void herself.

Because what Davies is exceptional at is character and emotion. The plot of "Doomsday" may be silly but the last minute separation of the Doctor and Rose, trapped on either side of an impassible barrier between universes, is genuinely tragic and upsetting. The series had been scripted in such a way that there was no logical reason why Rose would ever leave the Doctor's side. Previous companions have seen their entire personalities rewritten to accommodate their departures from the series (Leela being the one who comes most obviously to mind). Davies doesn't take that option with Rose: he takes the only ending imaginable other than death: the Doctor and Rose are separated forever, and nothing can be done to reunite them.

Of course all the sterling work done here - Davies' script, Harper's direction, Tennant and Piper's acting - is completely wasted two years later when Rose magically manages to come back anyway and gets her own living breathing David Tennant doll to love and hug and call George, but for now this is as perfectly constructed and painfully played companion departure Doctor Who has ever had.

It feels like plot threads are being tied up all over the place. Rose has her family again, including her father. The teasing code word "Torchwood" that's been mentioned over the course of Season 2 is finally explained. The Daleks are given a proper chance to return and the parallel universe Cybermen of "The Age of Steel" get to have their exploits wound up.

Overall this episode feels like an epic. Davies almost managed it in Season 1 with "Bad Wolf" and "The Parting of the Ways". He sort of slipped up the following year with "The Last of the Time Lords" and over-egged his pudding with "Journey's End". This is his finest finale: well balanced, dramatic, funny, action-packed and heartbreaking. Tennant's Doctor walking away from an empty wall, all alone, says as much about the lonely Time Lord as any number of mopey moments and monologues in a dozen or so episodes of the new series before and since. You just want to give him a hug.

Then there's the actual ending: Catherine Tate in a wedding dress shouting at the Doctor. It's such a perfect flip in tone that reminds us at the last minute that, yes, things are going to be okay.

But we could all probably do with that hug.

Email ThisBlogThis!Share to TwitterShare to FacebookShare to Pinterest
Labels: Doctor Who, reviews, science fiction, TV, Who50