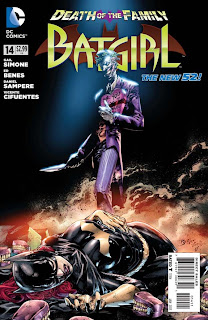 So this week, DC Comics fired Gail Simone. The widely acclaimed, high profile writer had been scripting Batgirl since the New 52 relaunch, but her new editor let her know via e-mail that her services would no longer be required. It's a stunningly poor move on DC's part: they were already tackling accusations of being a fairly hostile "boys only" club, and their apparent response in the past fortnight has been to first lose Vertigo editor Karen Berger and now fire Gail Simone.

In November, Batgirl sold 77,000 copies and was DC's fourth highest-selling title. Even in October, when it didn't have a "Death of the Family" tie-in to rely on, it still sold more than 50,000 copies. That's still 18th for DC, and 36th in the entire industry. It outsold Fantastic Four, The Flash, Wonder Woman, Captain America, Catwoman and Wolverine. Simone was keen to stay on the book. She loved the character.

Maybe I'm old-fashioned, but I honestly think the best superhero comics ever written have been written by writers who were given the chance to stick with a character they loved, not suffer too much editorial interference, and simply write the hell out of their book. Peter David on The Incredible Hulk. Grant Morrison on New X-Men. Chris Claremont on Uncanny X-Men. You can even see it now with Mark Waid's current run on Daredevil or Snyder's Batman.

As far as I can make out, there are two likely reasons DC would have fired Ms Simone from Batgirl. First reason: they wanted to "shake things up". New writer, new opportunities to promote the book, new editor wanting to make a fresh start. That's a stupid reason. Second possibility: the new editor wanted to push creative directions on the book that Simone was unwilling to accommodate. That's an even stupider reason: she has demonstrated over several years that she has a strong story sense and a brilliant head for character. If Gail Simone says your new ideas aren't any good, I'd be liable to believe her - otherwise what are you really paying her for?

Marvel did launch two new titles this week - Avengers Arena and Cable and the X-Force. I didn't buy either, having spent this month's Marvel money on double shipments of All-New X-Men, X-Men Legacy and Thor: God of Thunder. You see how this works, Marvel? Do you see?!

Under the cut: reviews of Batgirl, Batman, Batman and Robin, Change, Demon Knights, Frankenstein: Agent of SHADE, Hollows, It Girl and the Atomics and The Massive.

Gail Simone's penultimate issue of Batgirl sees Barbara Gordon face to face with the Joker, a confrontation she's been waiting on for years. While it's a great confrontation by itself, it does highlight a major problem with DC's "Death of the Family" Batman arc. When the Joker shot Babs in The Killing Joke, she was a character without agency - a plot point served up to motivate the male protagonists of the story. Under Simone's stewardship (and I don't mean just in Batgirl, she wrote the hell out of Birds of Prey too) Barbara is a character with a lot of agency, and as a result a confrontation with the Joker feels like it should be her story alone, and not a spin-off from a main plot in Batman (reviewed below). The Joker never shot Batman. He never paralysed him, or took photographs of his broken body to demean him. In dramatic terms it's Batgirl who should be defeating the Joker, and while we've still got an issue to go in this story I can hardly see her beating him when he's fighting Batman one comic over at the same time. (4/5)

The Joker is playing an exceptionally clever game here. All he's done so far, apart from murder a truckload of innocent people, is suggest to Batman that he knows his secret identity. His various sidekicks - Nightwing, Batgirl, Red Hood, Robin - are all freaking out, and Bruce keeps reassuring them that the Joker's bluffing. The only problem is that Bruce clearly believes the Joker as well. Scott Snyder is doing a genuinely clever thing here: he hasn't changed the Joker's personality at all, but he's found a new perspective on it. The lead story's last page is absolutely chilling. The back-up, co-written with James Tynion IV and with art by Jock, is laugh-out-loud funny in the most inappropriate of ways. It also marks (I think) the New 52 debut of the Riddler. It looks like Snyder's Riddler is going to be a joy to read, once "Death of the Family" is out of the way. (4/5)

With the third instalment this week of the "Death of the Family" arc, I think I've hit on why it's not working overall, despite the individual issues being outstanding. This one is, pitting Damian against the Joker for the first time. The problem is that the Joker can only be defeated once: if Damian takes him down here, then he can't be taken down in Batgirl. Or Red Hood and the Outlaws. Or Batman. The result is a pile of stories that simply can't have very satisfying conclusions, and as a result there's this nasty feeling at the back of my head that they're all essentially filler. Patrick Gleason and Mick Gray's art is stunning here - of all the artists to tackle the Joker in this crossover, they're the ones who have really taken the concept of the Joker having a strapped-on face and really exploited that to the fullest, most ghoulish extent. It's actually kind of gross. (4/5)

A rap star wants to make a Lovecraft-inspired horror movie. His screenwriter is more interested in stealing his car. For some reason she's under surveillance. They're both being hunted by cultists. Meanwhile an astronaut is on his way home from a lengthy mission to Io. This is a maddeningly strange comic book in the vein of Morrison and Hickman, overflowing with ideas but low - at this stage, anyway - on explanations. Morgan Jeske's art is distinctive and expressive. I know I sound like a broken record on this, but this is yet another Image miniseries (four issues in this case) that feels like it should have been published by DC Vertigo. It's really great stuff. (4/5)

Okay, this issue really impressed me. Paul Cornell's final issue is a rousing climax, tying together more than a year's worth of narrative in a seamless and wonderfully entertaining manner. I'm very sad to see him go. He even ties things into Stormwatch, which had always been promised since the New 52 launch, but I assumed had fallen by the wayside. I worry that Cornell is typecast as the writer of awesome superhero titles that don't last long enough - his Captain Britain and MI:13 is still one of my all-time favourite Marvel comics. Bernard Chang does brilliant art as well: clean, clear and dynamic. There's even a shout-out-loud moment for all of the Doctor Who fans reading. The comic continues next month with a new writer and a new direction; I kind of wish DC had ended Demon Knights here and relaunched it next month with a new title to go with the new writers. Sales aren't great on this book, and I can't see Cornell's departure doing anything but lower the readership still further. (5/5)

Speaking of books that aren't selling like they deserve: this penultimate issue of Frankenstein: Agent of SHADE is outstanding. Matt Kindt has really done a great job of following Jeff Lemire's initial run. It strikes me as bizarre that Animal Man, which is a core book of this "Rotworld" crossover, is so leaden and talky, while this book - which is on the periphery of the crossover - is an epic balls-to-the-wall fight for the planet against immense giant monsters and armies of rotting zombies. There's a lot of emotional payoff in this issue, as well as great expressive artwork by Ponticelli and Faucher. I have really come to love the characters in this book: I hope DC finds a good way to repurpose them now and again, because they have so much long-term potential. (5/5)

I'm not quite sure what to make of Hollows. It's a four-issue miniseries set in a post-apocalyptic Japan where humans live in enormous cities based in giant trees. Sam Keith provides typically curved, sketchy artwork to accompany Chris Ryall's script, but overall it feels like a strange case of "been there, done that". It feels derivative without me managing to quite pin my finger on what it is derivative of. Whatever the reason, this book completely failed to grab me. If someone told me they loved it, I wouldn't be surprised, but for me on a personal level it just didn't work. (2/5)

It Girl and the Atomics #5

It Girl is trapped inside a massively multiplayer online game at the behest of her evil sister. It's a wacky concept that's perfectly suited to Mike Allred's pop art Madman universe, and Rich and Norton are doing an outstanding job of matching Allred's style while he's away drawing FF for Marvel. I think 'fun' is the buzz-word here. If DC and Marvel are too regularly proving too violent, broody or pointlessly serious, It Girl and the Atomics is the perfect antidote. It's that fabulous rarity in comic books: one you can read with a shameless smile on your face. (4/5)

The Kapital docks at a free city comprised of numerous disused oil rig platforms bolted together. At first it seems like paradise. Then a storm comes rolling in, and the city's authorities demand control of the Kapital and one of Callum Israel's crew goes disturbingly AWOL. This is a very strong issue - I've been enjoying The Massive in fits and starts, but seven issues in and it really does feel like the book is finding its groove. Brown and Stewart contribute some great art as well - it's nice to have them back. This is a smart, well-written and nicely drawn science fiction comic for grown-ups: I approve wholeheartedly. (4/5)

Winner of the week: I'm giving it to Demon Knights. It's a fabulous send-off to a wonderful 16 issue run.
Loser of the week: From my pull list, there really isn't one. Even Hollows wasn't bad - it just didn't personally grab me.