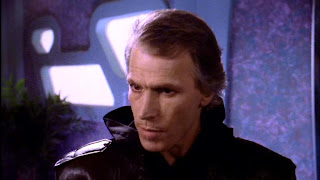 An old acquaintance of Talia Winters' is murdered in front of her by a mysterious agent, sending the station crew on a hunt into a mysterious agency named Bureau 13 who appear to be making controllable assassin cyborgs out of the bodies of the dead.

Watching this episode made me wish I was a zombie cyborg. It's an incredibly dull hour of television, low on energy or distinctiveness, and opening up a plot thread (Bureau 13) that is never resolved or brought up in the series again. I am struggling to think of anything interesting to say about this episode at all. In the background of one scene you can see security officer Zack Allen (Jeff Conaway) for the first time. That's pretty much it: everything else this week is liable to send you spiralling into a coma.

Unsurprisingly, this episode isn't written by J. Michael Straczynski. It's the work of Larry DiTillo, whose dubious list of previous episodes includes "Deathwalker", "TKO" and "Eyes". This doesn't plumb the depths of shoddy scriptwriting that those episodes did, but it doesn't include anything remotely good or interesting either.

It's also guilty of some really lazy plotting. DiTillo needs the characters to learn that their mystery undead assassin was constructed by the shadowy Bureau 13. How does he achieve this? He spontaneously makes one of the cast (Sheridan) a collector of conspiracy theories and information on secret organisations. That's just damn sloppy writing.

Oh dear. I was heading into Season 2 with much higher hopes than Season 1, because I remembered it being a massive leap up in quality. So far it's actually been the opposite. Six episodes in. Only two good ones so far. That's a score of 33%. Yikes.
Posted by Grant at 11:34 PM