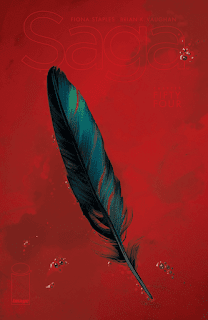 As Mime and Marionette are taken prisoner by the Joker, their lives are revealed in flashback - and the blunt violence of Watchmen invades the more abstract villainy of the DC Universe. There is a question that keeps coming up in this series, issue by issue, and thus far writer Geoff Johns has failed to give his readers an answer: what is this series for? The original Watchmen had a strong purpose that helped to make it a masterpiece, but Doomsday Clock simply doesn't seem to have one. It mimics the Moore/Gibbons original well enough stylistically, but it lacks the original's intelligence. It feels less like a story and more like merchandise. The art is pretty and there's some solid dialogue, but it lacks purpose. (3/5)

If DC wanted to know the secret to securing my love, it's their second-stringers: all the weird characters who are never popular enough to warrant their own ongoing series. They're pretty much on the money with their relaunch of Justice League Dark, which teams up Wonder Woman with Man-Bat, Detective Chimp,Swamp Thing, and Zatanna. The events of Dark Nights: Metal blew a hole in the universe, and while the main League fight against whatever weird menace threatens the Earth Wonder Woman is covering something entirely different that seems to be attacking magic instead. The premise is great, the set-up is effective, and James Tynion IV has picked one hell of a team to play with. I'm onboard and then some. (4/5)

To claim the throne of Atlantis and save both the kingdom and Aquaman, Mera fights a trial by combat against Orm, aka the Ocean Master. This miniseries finale leads directly into Aquaman #38, so if you're reading the latter it's worth tracking down the former. It's been a fairly run-of-the-mill superhero series, but it's been great finally seeing Mera get her own book - even if it's just for six issues. Sometimes it's nice to read a straightforward superhero book without pretension. (3/5)
Posted by Grant at 1:21 PM