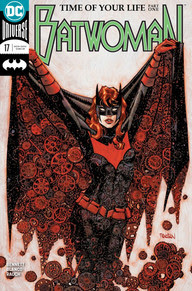 Kate Kane is back in Gotham City, caring for her sister at last and teaming up with ex-girlfriend Detective Renee Montaya to fight another unexpected super-criminal. That makes this issue an incredible breath of fresh air, replacing the overwrought anguish and self-analysis that has flooded this title for multiple volumes with likeable characters and a well-developed story. I had almost given up on the character, but as always a back-to-basics approach saves the day.

Renee is a fabulous character and it's great to see her return to the DCU. One assumes that with the last reboot her history as the Question has been erased, which is a shame - but there's always the possibility of pushing her back in that direction in future. Her arrival also continues pushing this title for strong female characters, putting her alongside not just Kate and Alice but Julia Pennyworth as well. Fernando Blanco's artwork continues to be solid, serving the story ahead of anything else. With luck this new approach will continue for a while. With the CW Network preparing a Batwoman television series, it would be a shame to have the comic book end now of all times. (4/5)

Below the cut: reviews of Batman, The Immortal Hulk, Quantum & Woody and Shadowman.

Mr Freeze has been captured, assaulted by the Batman and charged with a triple homicide. Now at trial, a jury of 12 Gotham citizens are assembled to deliver a verdict. Everyone thinks Freeze did it except one: Bruce Wayne. That's a killer hook for this new storyline, one which finds Wayne in a particularly bleak position - abandoned at the altar by Selina and fighting crime in a particularly brutal fashion. Len Weeks' artwork is excellent, and distinctly different from the last artist Mikel Janin. (5/5)

A collection of unreliable narrators tell this short, smart Hulk adventure, each version illustrated by a different artist or team. It's funny as well as horrific, in what has quickly solidified into a distinctive and original style for this latest Hulk volume. The differing art styles really bring out the various voices, each of which comes with their own personal beliefs and biases. We're only three episodes in, but this series is showing off an impressive amount of creativity. It is hard to predict where the story is headed, and that makes each of these early issues a delight. (5/5)

It's time for a new storyline and a debut for new artist Joe Eisma. The comedic heroes are back from the atomic realm, but have brought dangers back with them. What's worse, their power restrictions have been reversed: now if they stick together their abilities disappear! The tone of Eliot Rahal's script is consistently amusing and breezy, but unfortunately Eisma's artwork does not sell it particularly well. The proportions are a little too off to work properly, and with Andrew Dalhouse's colouring everything looks a little too weak and blurry. It's not a dealbreaker, but it's not a selling point either. (2/5)

Introducing Marius Bonniface: the first Shadowman. This is a neat slice of comic book horror, and certainly the period setting helps it a great deal. I am not usually too invested in Shadowman, but this issue shows that with a more old-fashioned setting to sit alongside the gothic horror there's a lot more potential to the character than you usually get. Doug Braithwaite's artwortk and Jose Villarrubia's colours both really bring their A-game this issue. It's a slick, entertaining piece of work. (4/5)
Posted by Grant at 10:31 AM