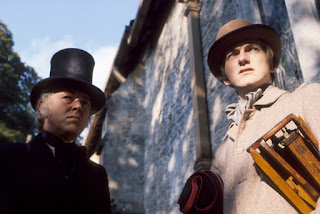 It is 23 December 1974, and time for another Ghost Story for Christmas.

The Reverend Justin Somerton (Michael Bryant) is a medieval scholar investigating the apparent hidden treasure of the Abbot Thomas - a priest in the Middle Ages accused of demon worship.While aided by his young protege Lord Peter Dattering (Paul Lavers), Somerton's research appears to awaken unearthly and unwelcome powers from beneath the church.

I recently mentioned in a review of The Stone Tape just how impressive and underrated an actor Michael Bryant appears to be. Here he is again, delivering a sterling lead performance in this excellent short horror feature. At 37 minutes in length, it does not have much time to tell its story, and so it boldly dives in without an unnecessary moment in it. The short feature is a near-impossible length of movie to sell commercially, and so it's commendable that the BBC dedicated so much time in the 1970s to such productions.

M.R. James' relatively slight short story is developed further in this television adaptation (with a script by John Bowen), notably by the introduction of an extended prologue in which Somerton is invited to - and then fundamentally demolishes - a seance operated by two charlatans. It is an excellent introduction to the character, showcasing both his sharp intelligence and his disbelief in the supernatural and ghostly. This makes it all the more effective when the supernatural begins to edge into his archaeological research.

When Somerton does discover Thomas' hidden treasure, he unlocks something utterly nightmarish. Its precise form and purpose remains obscured throughout the film, and that of course makes it all the more frightening. We never really get a proper sense of what it is and what it wants, simply that it is evil, supernatural and is clearly stalking the terrified Somerton. Horror is always best when it goes unexplained, and the limited production budget forces director Lawrence Gordon Clark into leaving as much up in the air as possible. In Clark's favour the location shoot makes the whole film feel a lot more expensive that it actually was; it's nice to see the famous curved stone stairs of Wells Cathedral make an appearance.

Paul Lavers struggles with a fairly limited character - Dattering is, after all, only really there to ask questions and look astonished. By contrast Michael Bryant does marvellous work with a character that could have sustained a whole series of 19th century archaeological horror. His screen presence is excellent. Based on this, his famous episode of Colditz, and The Stone Tape, I'm rather keen to track more of his performances down.

This is another strong episode of A Ghost Story for Christmas, making it two for two out of the ones I have seen. Over the next month or so I hope to watch a few more; it is the BBC's idea of Christmas festivities, after all.
Posted by Grant at 8:42 AM