Star Trek: "The Next Generation: "Man of the People" 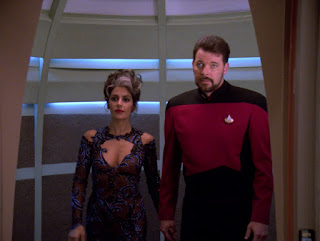 It is 5 October 1992, and time for another episode of Star Trek: The Next Generation.

Counselor Troi (Marina Sirtis) begins acting strangely after she meets an alien diplomat sent to negotiate a badly-needed peace treaty. She becomes highly sexualised, jealous and ages rapidly. I would go on with the synopsis, but to be honest it is a superficial, simple and blindingly obvious story that is not very entertaining to watch.

In the production team's defence, they were making TV drama at a time when they were required to produce 26 episodes every year. That's a tall order, and not all of those resulting episodes are going to be winners. It's inevitable that a few low-quality ones will get across the line, and very occasionally an absolute stinker will make it too. It is usually an issue of time: there's simply so much pressure to get the episode made that now and then one goes through without a script that works.

It is a bad episode for a couple of reasons. Firstly it is blatantly obvious from the get-go what is going on: the empathic ambassador Alkar (Chip Lucia) essentially uses woman as dumping grounds for all of his negative emotions and energy. He remains strong and youthful, and they rapidly age and decay as they fall into a dementia filled with rage and jealousy. Secondly Chip Lucia simply doesn't present a charming enough character to be convincing. Thirdly, and most importantly, the storyline requires Troi to behave in increasingly demeaning ways while wearing more and more lucidrous old age make-up.

Marina Sirtis gamely does her best, but she is fighting a losing battle. The episode boils down to Troi acting further and further out of character, and wearing increasingly sexualised clothes, until her psychic link with Alkar is discovered and Dr Crusher (Gates McFadden) can do something to help her. There is no agency given to Troi. She is a victim, she is forced to behave abominably, she is effectively assaulted over and over again by her male assailant, and then she is ultimately rescued. Now that we're heading into a sixth year of The Next Generation, it is clear that the two female leads - Troi and Crusher - remain the least developed characters. While McFadden definitely loses in terms of the number of episodes focused on her character, Troi loses in terms of those opportunities being wasted. Sirtis and the audience both deserve better.

This is the second poor episode out of three for Season 6, dropping the quality ratio to a worrying 33 per cent. There's still time for that to improve enormously: after all, the production team still had to make another 23 episodes before the season was out.
Posted by Grant at 9:20 AM