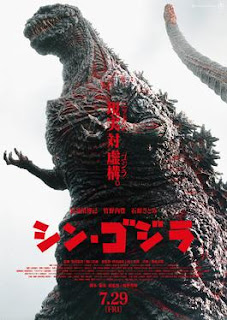 In many respects my standard review opening paragraph, which relates a film's basic storyline, is unnecessary here. Shin Godzilla is the latest feature film in Toho's long-running Godzilla franchise, and the general destructive formula of the series remains largely unchanged. The continuity may be completely rebooted, and some new ideas thrown in around the titular monster's design and abilities, but the standard narrative remains. Godzilla comes to Tokyo and destroys a lot of expensive real estate, and the Japanese government and military scramble to stop him from doing it.

Shin Godzilla is Toho's first new Godzilla movie in 12 years, following the rather over-the-top and deliberately silly Godzilla: Final Wars. While both films are clearly works of the same franchise, they could hardly be more different. While Final Wars presented a string of wrestling-style fights between Godzilla and a host of rival giant monsters, Shin Godzilla is a slightly odd political satire with no rival monsters in sight but a seemingly endless string of meetings, briefings, press conferences and diplomatic negotiations. It is a film less about giant monsters and a lot more about the inefficiencies of bureaucracy and the obfuscation of politics. I loved it. I strongly suspect most international viewers are going to hate it.

Here's the thing: a lot of people, myself included, go to a giant monster movie to see a giant monster trash things and generally be a destructive nuisance. It's one of the reasons I have always loved the Incredible Hulk on a rampage; there's a wonderful sense of childlike glee to be had in watching something effectively have a city-levelling tantrum without anyone being able to stop it. Watch any small child and you can usually observe that building a giant tower out of blocks is never as enjoyable as smashing it to pieces afterwards. A giant monster flick without much in the way of giant monsters can be a recipe for disaster: take Gareth Edwards' 2014 American remake of Godzilla. It looked fantastic when the monster was on-screen, but those moments were few and far between: eight minutes all together, the second-lowest percentage of screen time in Godzilla history. Now I can't find out how much of Shin Godzilla features the Big G, but I'm willing to estimate it's not too many more minutes. Viewers who went looking for a kaiju bonanza in 2014 and came away disappointed will likely have a similar experience in 2016 with Shin.

So why does Shin Godzilla work so well for me when Edwards' Godzilla did not? Essentially it boils down to Shin being about something. Just like the original 1954 film bottled up and re-expressed a lot of social angst over atomic weapons and nuclear radiation, Shin Godzilla picks up all of the public dissatisfaction and cynicism over the Japanese government's response to the Fukushima nuclear power plant disaster of March 2011. Differing levels of government dithered over demarcation issues. Politicians held back from properly informing the public of risks and dangers. For the unaware foreign viewer, Shin Godzilla does appear to be a film filled with press conferences and ministerial briefings. For the Japanese viewer, it's a pointed satire about the failure of government during a national crisis. It throws in some sharp criticism of Japanese-American relations for good measure.

The effect of this approach is to make the film to a large degree 'inside baseball': if you're not aware of Japanese dissatisfaction with governmental responses to natural disasters and health crises, it may all come across as rather boring. If you are aware, it is a very different kind of a film. It's rather clever, and nicely political, and more than anything else tremendously and bitterly cynical. Fans of political drama and giant monsters, which is certainly one of the smaller niche audiences I can imagine, will have a field day with this movie.

The giant monster moments, when they do come, are wonderfully presented as a combination of CGI, motion capture, and performers in rubber suits on scale model sets. Altogether it feels like a nice blend of old school nostalgia and contemporary visual effects. One key sequence involving Godzilla's iconic atomic breath ranks among the best such scenes I have seen in a kaiju feature, and draws heavily on co-director Hideaki Anno's popular anime series Neon Genesis Evangelion.

While opinions on Shin Godzilla are pretty mixed, I think that is a wonderful thing. Godzilla has been knocking around for more than 30 films now. It would be easy to churn out yet another giant monster fight, but it would never be as interesting. Directors Anno and Shinji Higuchi (a former effects supervisor on the 1990s Gamera trilogy) have made something distinctive and bold, and whether it works for each individual viewer or not I will take distinctive over predictable any day.
Posted by Grant at 7:33 AM