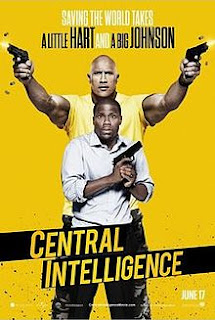 In high school Calvin Joyner (Kevin Hart) was the most popular boy in class. By contrast Robbie Weirdicht (Dwayne Johnson) was an overweight bullied teen who got stripped naked and thrown in front of his classmates. Jumping forward 20 years and Calvin is a safely married accountant and Robbie - now using the name Bob Stone - is a muscle-bound secret agent working for the CIA.

Oh the things we will watch when bored and on an aeroplane. There's a problem with mainstream American movie comedies. The majority are, in my opinion, fairly poor and not particularly funny. To be fair that's a problem with almost all cinema, but in regards to this country and this genre it seems more pronounced than most. It is often difficult to tell which ones will be the diamonds in the rough, however, and eventually you have to wind up watching them to find out.

Central Intelligence has promise. Dwayne Johnson has a huge screen presence and a demonstrated ability to be funny on-screen, and the commercial success of Central Intelligence suggested that it might exploit his talents well and be rather funny. Unfortunately the film falls very flat. The jokes feel tired and it struggles to make an impact. What is worse, it is plagiarising - intentionally or more likely unintentionally - someone else's film.

Back in 2010 James Mangold directed Knight & Day, an action-comedy starring Tom Cruise as a secret agent who may or may not be a maniac gone rogue and Cameron Diaz as a safe, boring everyday person constantly kidnapped by him and thrown into mortal danger. Central Intelligence may cut out the romantic elements of Mangold's film, but broadly speaking it's the same damned movie. Knight & Day was rough and idiosyncratic, but despite its flaws I found it pretty enjoyable. Central Intelligence just feels as if the life has been sucked out of it.

I get the feeling that the filmmakers - including director Rawson Marshall Thurber (We're the Millers) - know that their film is not working, because so much effort is spent laying joke elements over everything. Bob Stone is not just a bright, overly friendly CIA agent. He loves unicorns and wears them on his t-shirt. He walks around with a fanny pack around his waist. In developing the character everybody has simply tried a little too hard. Small supporting appearances are made by actors like Aaron Paul, Jason Bateman and Melissa McCarthy, as if their presence will help to prop up the movie. Dwayne Johnson does his best, but as with his recent hit San Andreas the best he can do is be an entertaining actor in a bad movie. Kevin Hart is an actor with whom I am familiar without having seen him act before. He seems like a solid enough performer, but he is not given much with which to work.

Like many comedies of the last decade or two, Central Intelligence plays outtakes and bloopers over the closing credits. It's always a warning sign: if your outtakes are funnier than your actual jokes, your comedy is in big trouble.
Posted by Grant at 7:35 AM