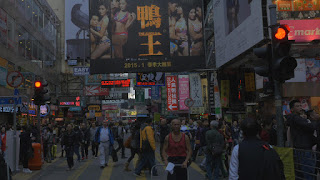 Always push your viewing habits. I am not demanding that you do so constantly, but always make sure you push a little on your comfort zones. If you only ever watch science fiction, go watch a straight drama. If you only watch Hollywood, go watch an independent film. If you watch a lot of films from Europe, watch one from Africa. I think it's a valuable exercise for any regular moviegoer to occasionally explore new territory, and I certainly try to do so from time to time. It cannot all be Johnnie To action thrillers and 1970s BBC science fiction episodes.

Where Are You Going is a new arthouse film by Chinese filmmaker Zhengfan Yang. Yang live in Hong Kong for five years, and it was clearly an experience that resonated with him because he returned there to showcase it in his new work. The film is a series of taxi rides through the city, each announced with a bilingual title card. Some of the journeys take place in silence. Some of them contain awkward, hesitant conversations between the taxi driver and his passenger. Some feature lengthy, in-depth conversations about life in Hong Kong and how the city is changing. The camera never moves, and it is not even pointed at the actors. Instead it's fixed straight ahead from the roof of the taxi: it makes Hong Kong itself as much of a character as the people inside the taxi.

So this film seems almost perversely constructed to try the viewer's patience. Not only does the angle never change, but the camera seems set on an automatic focus. Since the car keeps driving around with other cars over-taking it, pedestrians crossing at sidewalks, and so on, the picture is regularly slightly blurry and out of focus. On a big screen it can be hard for the eyes. With minor bumps in the road a regular occurrence, it is also likely to be hell for anyone who suffers from motion sickness. The film is also 140 minutes long, meaning the viewer is going to be watching the streets of Hong Kong for a remarkably long time.

The quality of the conversations vary enormously. Some are funny, some are serious. One lengthy conversation, featuring an English businessman leaving the city after seven years of working there, is actively painful to listen to thanks to some dreadfully poor English language dialogue. In isolation they may vary, but when viewed together they begin to stitch together a picture of Hong Kong that is remarkably accurate and thorough. We hear from rich stock traders, poor Chinese immigrants struggling with prejudice, young women drunkenly chatting between parties, and Filipino maids enjoying their one day of the week off between gruelling 16-hour shifts. Occasionally the character's lives seem to intersect slightly. Several of the conversations make reference to a 'dying' city, one where increased influence by Beijing is slowly eroding those things that made Hong Kong so distinctive. It is a nostalgic film, but sometimes almost a mournful one too.

Something remarkable happens when watching the film. Usually a film's cinematography will guide the viewer to whatever the director wants them to see, using tracks, pans, cuts and focus shifts. Here Zhengfan simply locks the camera in one direction and leaves the looking to his audience. During a lengthy drive through Tsim Sha Tsui towards the city's famous Star Ferry terminal, I found myself noticing more and more elements around the streets. Other cars. Shops and billboards. Pedestrians. The longer the scenes go on, the easier it becomes to simply get into a zone and go with the slow, languid pace. It begins feeling interminable. It ended feeling weirdly relaxing.

This is absolutely not a film for a mass audience. It is unusual and rather challenging. For fans of experimental cinema it is well worth checking out. For fans of Hong Kong itself, it seems a wonderfully on-point love letter. I feel like my film horizons got stretched just a little - it is a good feeling.
Posted by Grant at 7:15 AM