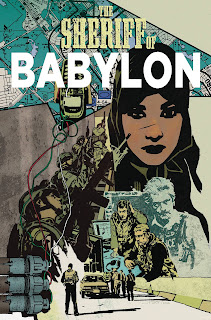 The hunt to take down Abu Rahim nears its final stage, as Chris, Sofia and Nassir meet with the American intelligence operatives that are preparing to make it happen. This issue is an increasingly tense build from page one, and continues Tom King and Mitch Gerads' faultless track record with this remarkable book.

Let us be honest: DC Vertigo is an imprint that has seen better days. Basically all of the books you would think would be a perfect fit for the Vertigo brand now seem to be cropping up over at Image, and even Boom Studios. Vertigo is seemingly left with nostalgic revamps - Lucifer is one recent example - or short-run books that simply fail to grab anybody's attention. Wedged into this slowly fading mass of books is The Sheriff of Babylon. It's a complete outlier, because not only is it the best Vertigo title getting published at the moment, it is hands-down one of the best series that Vertigo has ever published.

This issue showcases outstanding character work. It isn't just that King's script pushes his three protagonists up against some really unlikeable and unpleasant characters - Chris, for example, comes face to face once again with the man who had Nassir's wife shot dead, and cannot do anything about it. The bigger asset this issue is just how exceptional Gerads is at capturing subtle and slightly hidden emotions in his characters. It transforms them. It makes them seem so real. (5/5)

The Sheriff of Babylon #9. Written by Tom King. Art and colours by Mitch Gerads.

Under the cut: reviews of Daredevil, Giant Days and Superman.

Two self-contained stories, neither of them particularly great. The main story involves Echo and Daredevil teaming up to defeat the sound-based villain Klaw. Soule's script assumes the reader's immediate familiarity with both Echo and Klaw, which is a problem if you (like me) are basically aware there is a character named Echo and thought Ulysses Klaw was some kind of South African gun-runner from the film Avengers: Age of Ultron. Del Rey's sketchy art style is rendered rather murky by Mat Lopes' very dark colours. Meanwhile Roger McKenzie's backup suffers the main problem of most backups: it's just too short for a story to properly develop. Unless you're a completist this $4.99 issue can definitely be skipped. (2/5)

More university hijinks ensue: relationship woes, school woes, and pretty much all of the usual Giant Days shenanigans. Something that really struck me in this issue is how Max Sarin's artwork has slowly been evolving, issue by issue, into a more personalised and effective look. He took over the book from previous artist Liz Tremain, and while he has kept the character designs his overall style has become much more his own. It looked really good this month, and that only made John Allison's comedic script even funnier. (4/5)

Superman and his son Jonathan battle the Eradicator, which wants to kill Jon for being an impure Kryptonian-human half-breed. I have been really enjoying this storyline, but this issue just feels like a mess. It is relatively difficult to follow, with the action suddenly jumping from one end of America to the other without explanation, and an awful lot of plot being suddenly thrown in and then not sufficiently explained. The art remains great, but it's serving a fairly incomprehensible story. It's a shame. (2/5)
Posted by Grant at 7:12 AM