Star Trek: The Next Generation: "Legacy" 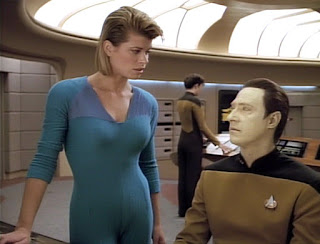 The Enterprise responds to a distress call on the planet Turkana IV, which has been locked in civil war for several decades. For the Enterprise crew the lawless planet has a particular resonance: it's the birthplace of their late comrade Tasha Yar. The resonance only increases when their efforts to rescue two Federation pilots brings them face-to-face with Tasha's sister Ishara.

For those keeping count, this is the fourth episode this season focusing on themes of family. Oddly enough, however, the family link is to a character that has been dead for almost three seasons. The spectre of Tasha Yar hangs over this episode, notably over Commander Data (Brent Spiner), who spends the most time with Ishara (Beth Toussant). He of course had one of the closest relationships with Tasha back when she was alive, and he rapidly forms a personal connection with Ishara as well. It's another one of those "Data explores humanity" episodes, where Data demonstrates a wonderful ability to feel and express gentle emotions while simultaneously claiming he doesn't experience them.

That's assuming of course that Ishara is who she claims to be. She's suspect from the get-go, conveniently arriving to convince Captain Picard (Patrick Stewart) to side with one half of a civil war over the other. Genetic testing by Dr Crusher (Gates McFadden) appears to support Ishara's claim, but then in a science fiction story such tests could easily be faked. You would think the telepathic Counselor Troi (Marina Sirtis) would be able to tell Ishara's authenticity in a split-second, but instead she spends the entire episode bemoaning that Ishara's emotions are 'ambivalent'.

That's the problem with doing this kind of 'is she/isn't she' storyline with a telepath onboard. To keep the suspense going you basically have to cheat. There's no real reason given for Troi's inability to solve the mystery of Ishara's identity - I guess maybe she was having an off day.

By the end it's clear that what we're watching is a heist story: a group of plucky criminals have put together the ultimate score and conned their way into getting it. The problem is that heist stories really only work one way around. Watching a team of inventive gangsters assemble a clever con is great fun when you're on the gangsters' side. Watching their marks flail about, get deceived and ultimately be taken advantage of is nowhere near as enjoyable. The episode ends with Ishara feeling guilty, the Enterprise command crew feeling suitably embarrassed, and Data feeling regret without actually knowing what it is he's feeling.

It's ultimately a bit of a misfire. While Brent Spiner does some excellent work with Beth Toussant (who has, it must be said, a striking resemblance to Linda Hamilton), the episode every simply doesn't really work. That leaves us six episodes into the season, and with four good episodes overall. The quality ratio drops to 67 per cent.
Posted by Grant at 5:02 PM