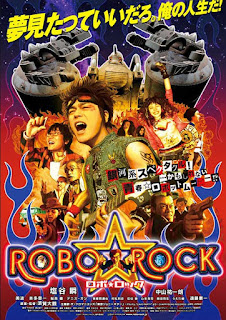 There will always be a special place for the ultra-low-budget cult film, produced on a shoestring but boasting a highly idiosyncratic storyline and a distinctive tone. They're often quite shakily produced, with more enthusiasm than craft, but they have such a punk-rock enthusiasm that it's difficult not to forgive their drawbacks and focus on whatever weird, one-of-a-kind type of story they're telling.

Robo Rock is a pretty decent example: it was the first live-action project by Japanese animation studio Gonzo, released without fanfare in Japan in November 2007 and pretty widely ignored upon release. To date it's yet to receive a home video release outside of Asia. The film follows Masaru (Shun Shioya), a failed rock singer in his mid-twenties who tries to earn a living by either mooching off his tattoo artist girlfriend or working as a 'handyman' for a local yakuza. He might have to do any number of things as a handyman: steal underwear from a clothes line to sell to a pervert, take a new and illegal drug to find out its side effects, or even something as simple as taking an elderly resident for a walk around the neighbourhood.

One day Masaru is accosted by an eccentric public servant who informs him that aliens are plotting to invade the Earth, that there is a giant robot constructed to defeat them, and that after the robot's creator died Masaru is the only person in the world capable of operating it.

You would think, from that premise and the robot-dominated poster, that Robo Rock would predominantly be about Masaru piloting some enormous mecha to defeat alien invaders. Instead it devotes much of its running time to Masaru's growing concern about his best friend Ko - a fellow handyman - and their pairing-up to deliver a rare and illegal drug to a gang of professional criminals. On that level alone the film might be something of a disappointment, but taken on its own merits it's an imaginative and nicely strange little comedy.

It's a stunning mash-up of genres, throwing in elements of comedy, science fiction, action, crime, thriller, punk music, and ultimately uplifting drama about never giving up on one's dreams. It's edited fast too, with plenty of whip pans and crashing edits to give the whole package plenty of momentum. The acting is almost universally broad, particularly from Yuichiro Nakayama as Nirasawa. He's a seemingly deranged and credulous public servant who's become convinced that the Japanese government secretly built a giant robot back in the 1960s named Land Zeppelin. The robot's original creator - who may or may not have been a deluded bicycle repair man - claimed to control the robot with his voice, and since his death Nirasawa has been fruitlessly searching for someone with an identical voiceprint. He thinks he's found it in Masaru, but Masaru remains unconvinced - as does the viewer, quite frankly - as to whether Land Zeppelin is real or simply that Nirasawa is a deranged maniac.

Soichi Honda is nicely deadpan as Ko, the long-haired handyman whose willingness to accept any assignment looks set to get him killed sooner rather than later. His dry, impeccably calm performance really makes him stand out against his co-stars.

This is by no means a faultless film. Its second act does seem to drag a little in comparison to its breakneck opening or its deliberately ridiculous climax. It does also deal pretty broadly in stereotypes and clichés when it comes to its characters. Despite these problems its low budget does engender more than a little sympathy, and it's definitely funny and weird enough to bring itself successfully over the line. Sometimes just enough originality and energy can make a film worth watching and easy enough to enjoy. Cult films are like that.
Posted by Grant at 7:26 AM