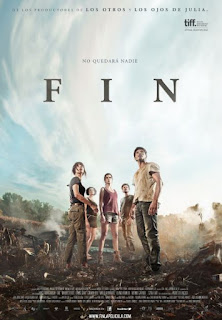 It seems that in recent years we've been awash with films about the end of the world. Lars von Trier's Melancholia, Zak Hilditch's These Final Hours and Lorene Scafaria's Seeking a Friend for the End of the World all represented the lives of random, ordinary people in the final days and hours of human life on Earth. You can add to that list The End (aka Fin), a 2012 Spanish thriller by first-time director Jorge Terregrossa.

The film focuses on a group of friends. Two decades ago they were a close-knit group of university students. Now they all have their separate lives and families, and by coming together in an isolated rural cottage old wounds and conflicts rapidly rise to the surface. One night there's a spectacular flash in the sky, and all power is cut. The telephone line is dead, their cars won't start, and their only option is to walk to the nearest town for help. On the way they begin to see ominous signs that something has gone terribly wrong: abandoned houses, crashed cars, and packs of hungry dogs running through empty camp sites. It is as if the entire human race has vanished, leaving only these friends alone in the world.

We always seem to have a need to categorize films. Some films, and The End is a good example, actively refuse to be easily pigeon-holed. It's widely regarded as a thriller, but really with its supernatural elements and rising sense of dread it's much closer to a horror. That said, the kind of slow-developing apocalypse the film presents is a poor fit for the majority of horror movies of which you could think. It is almost as if we need a specific sub-category to accommodate this kind of story. Slow horror, maybe. It's a frightening film, but it deliberately takes its time.

Not only does the film take a deliberately slow pace, it keeps the audience guessing. As the old friends talk, conflicts begin to arise. It turns out that most of them share a secret about another member of the group, a man named Angel who suffered a mental breakdown and was sent to an institution. When it is revealed that it was Angel who had their reunion arranged in the first place, the paranoia begins to build. When members of the group start to go missing one by one, it's easy to question whether the elusive Angel is behind that as well.

Then, cleverly, the film throws you off balance. Maybe you're watching a slow-building slasher flick. Then again, maybe it's a zombie movie. Perhaps it's a disaster film - some terrible calamity has occurred with our protagonists too far into the country to be affected. Maybe it's a Biblical End of Days. The film keeps shifting its position, keeping its audience off-balance.

The film features strong performances, with the cast doing a lot of the work in clearly differentiating their characters. Particularly strong are Carmen Ruiz as Sara, the friend who arranges the reunion on Angel's behalf, and Clara Lago as Eva, a sex worker hired to pretend to be one of the party's girlfriend - who now finds herself trapped with them as the world appears to collapse around them.

The film is exceptionally shot and elegantly framed. Viewers seeking direct answers will likely be frustrated by Terregrossa's refusal to provide any straight explanation for what's going on. The tone, the characters, the set pieces, however, are all wonderful. This is a film whose images stick in the mind.
Posted by Grant at 8:52 PM