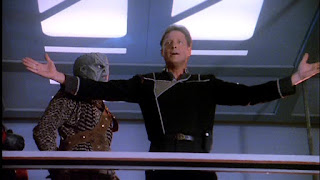 Zack thinks he's got a lead on the whereabouts of Michael Garibaldi. Delenn's attempts to unite the non-aligned worlds end in failure, with rising tensions on the station and rumours of a rally against her leadership. On Centauri Prime, Emperor Cartagia begins to torture G'Kar, and he refuses to stop until he hears him scream.

I mentioned this in my review of "Whatever Happened to Mr Garibaldi", but it's become even more apparent here: Season 4 of Babylon 5 has become so aggressively serialised that it's quite difficult to distinguish the storyline from one episode to the next. Sheridan's disappearance and resurrection on the surface of Z'ha'dum gets pushed forward a little more, as does Garibaldi's own kidnapping, as does Delenn's struggle to control the League of Non-Aligned Worlds, as does Londo Mollari's plot to assassinate Emperor Cartagia. This kind of dense serialised narrative is commonplace today, particularly on cable and streaming TV providers, but back in the mid-1990s it was pretty groundbreaking stuff: particularly for a mid-budget sci-fi series like this.

To an extent, then, reviewing this episode is a third trip round the block after the first two this season. The segments with Londo and G'Kar are the best ones, the parts on the station less so. Thankfully we're spared any more of Sheridan and Lorien on Z'ha'dum, but we do get a very stirring St Crispins-style speech from Sheridan at the episode's climax.

Ivanova and Marcus take the White Star into deep space in the hopes of finding any of the First Ones - the original inhabitants of the galaxy - who might aid their fight against the Shadows. What they find instead is a massive Vorlon fleet hiding in hyperspace, and a plot to eliminate any planet where the Shadows have hidden. It's a great, rather shocking twist, and does a brilliant job of upping the ante. Fighting the Shadows seemed near-impossible, and now the Vorlons are on the rampage as well, actually obliterating entire planets as they go.

This is a critical episode of the series, because it finally reveals precisely what the Shadows are, and what they've been trying to do. It also explains the Vorlons, and the link between the two species. It should make for a stunning hour of television, except Straczynski commits the critical flaw of drama: he tells and doesn't show. What should be a dramatic revelation is instead turned into a short lecture in a meeting room. The First Ones left the galaxy, but the Shadows and Vorlons remained behind. One species wanted to push the galaxy's younger races by forcing them into violent conflict. The other wanted to let them develop at their own pace. It's a fairly cool concept, but when described by Sheridan to his crew it's as dry as all hell and actually a little dull.

The episode ends in a good place: G'Kar tortured to near death, Cartagia mad as ever, Garibaldi back but without any memory of what happened, Sheridan back in control of a unified League, and now two super-powerful enemies to defeat instead of one. It's just a pity that such a critical moment of the series was fumbled so badly. In addition, Lorien continues to irritate and G'Kar's 'jester' outfit looks more ridiculous than disturbing.

Was the episode enjoyable? To an extent, and I'm extending it the courtesy I always extend these science fiction episodes. Entertaining enough is, after all, still entertaining. We're three for three in Season 4, albeit with a huge caveat.
Posted by Grant at 7:48 AM