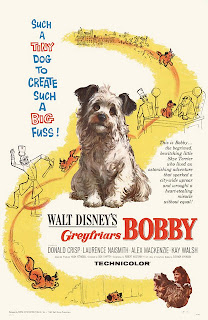 Greyfriar's Bobby was a Skye Terrier that, upon the death of his master John "Jock" Gray in 1858, guarded the policeman's grave site at Greyfriar's Cemetary for the following 14 years. The dog is something of a local Scottish legend, inspiring a bronze statue by Edinburgh's George IV Bridge, a popular novel by Eleanor Atkinson and this 1961 feature film from Walt Disney.

It is likely that Greyfriar's Bobby was a hoax, established by 19th century Edinburgh shop owners trying to drum up some extra tourism. The truth has never been one to stand in the way of a good story, however, and so Bobby remains widely loved, and his statue remains a popular Edinburgh tourist attraction.

The Walt Disney film, shot on location in Scotland and in London's Shepperton Studios, is typically heartwarming Disney fare. The original story has been changed somewhat from the original legend - Jock has become an old shepherd wracked with pneumonia, for example - but the basic story remains. Like a lot of Disney live-action films of the period, local actors are widely used. It's nice to see a film set in Scotland with actual Scottish actors speaking with actual Scottish accents. The cast includes Gordon Jackson (The Professionals), Alex Mackenzie (who also appeared in Disney's Kidnapped), Oscar winner Donald Crisp (How Green Was My Valley) and Laurence Naismith (Camelot). Don Chaffey directs with his usual no-nonsense skill: he was never a particularly distinctive director but his many films were generally very entertaining.

Greyfriar's Bobby combines a couple of Walt Disney's personal obsessions: he had a strong love for animals, something that is evident in many of the films and shorts he produced. He was also particularly fascinated with Great Britain, and this interest led to him producing all manner of Anglophile productions: Mary Poppins, Bedknobs and Broomsticks, Rob Roy and Dr Syn: Alias the Scarecrow. Greyfriar's Bobby is not as good as any of those films I have just listed, but it's warm and well intentioned. In many respects it could act as the archetypal Walt Disney feature from the 1950s or 1960s: it's suitable for all ages, it's not too scary but not too saccharine, it's cast with a range of talented "oh where have I seen them before?" character actors and has a cute dog for a star.
Posted by Grant at 12:31 PM