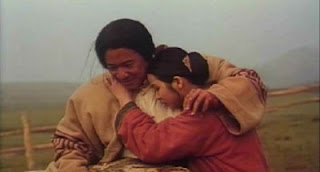 The Avenger (Zhang Fengyi) is a wandering swordsman suffering from a deep post-traumatic malaise. He arrives in a rural valley in western China to wait for someone. While waiting he struggles to retain his composure while encountering an old warrior-turned-monk (Ku Feng) and a kindly woman (Yang Kuei-Mei) who runs the local inn and bathhouse.

Sun Valley, from Chinese director He Ping, is a remarkably sedate film. It formed the second part of a trilogy of 'Chinese westerns', films that deliberately riffed on the tropes of the American western genre and re-worked them into a Chinese context. I have not seen the first film in this trilogy, Swordsmen in Double Flag Town (1991), but I have seen the third: He's masterful 2004 action film Warriors of Heaven and Earth (2004), which I liked very much. Sun Valley is a much quieter, less accomplished work. It feels rich with potential, but the potential is - for much of the film's running time at any rate - unrealised.

Zhang Fengyi delivers an excellent performance as the Avenger, awkward around Yang Kuei-Mei's wary innkeeper and bottled up with tension whenever he is around others. On more than one occasion the sight of blood sends him into a violent frenzy, murdering anybody in his vicinity with his sword. It's a curious behaviour that goes largely unnoticed and unpunished throughout the film. We see him slaughters several farmers at a time, but no one seems to send in a lynch mob to kill him and within a few scenes the inn seems packed with locals again. The screenplay, which is sparsely plotted and inconsistent, is definitely not the film's strength.

One positive feature it can boast about is its wonderful sense of place. The mountain steppes on which the inn is located are dusty and inhospitable during the summer and snowy and frozen - and similarly inhospitable - during the winter. It's all shot very well with solid sound design: you can feel the environment around the characters, and the frontier nature of the setting is well realised and excellently expressed.

A strong performance and solid mise-en-scene can not, however, save an entire film. In the end the weak plotting causes the film to drag interminably to the point where the average viewer could be excused for not actually finishing it. There is a lot of promise to Sun Valley, but it's simply not sufficiently explored or expressed to make it worth the viewer's time. It is a sadly missed opportunity.
Posted by Grant at 7:29 AM