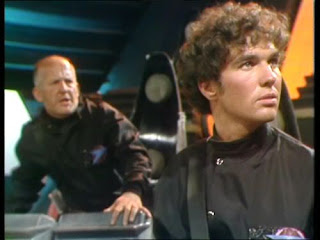 Avon (Paul Darrow) and Dayna (Josette Simon) have teleported onto the Liberator, only to find it occupied by a squad of Federation troopers. On the planet Chenga, an injured Vila (Michael Keating) finds himself on the run from the mysterious "hi-techs".

"Power Play" is, in effect, the second half of a two-part story. By its conclusion the Liberator is fully restored, and it has a crew again. Avon, Cally and Vila have returned, and they are joined by two new recruits: Dayna Mellanby, introduced last episode, and now Del Tarrant (Steven Pacey). Both Blake and Jenna are referenced in dialogue - both are alive and en route to safe planets - but the series doesn't really make it clear that they're never returning to the ship. To an extent I think the audience is expected to work that out for themselves.

"Power Play" is divided into two quite separate storylines, and to an extent shoving them into the episode together winds up half-strangling the potential of both.

The main storyline sees Avon and Dayna arriving on the Liberator, only to be arrested at gunpoint by Federation soldiers. They eventually manage to escape, leading to a manhunt through the bowels of the ship as Avon and Dayna try to stay one step ahead of their captors. It's a nice basic premise for an action story, one made more dramatic when it becomes apparent that somebody is murdering the Federation soldiers one by one.

It turns out to be Tarrant, actually an aspiring space pirate in disguise. At one point Avon suggests an alternative possibility: that there's a third party sneaking around the ship without anybody else's knowledge. That actually strikes me as a better plot twist, and to an extent I'm disappointed that's not the one with which they go. Given the full 50 minutes a very clever episode might have been developed out of this premise - since it's sharing the screen with Cally and Vila's simultaneous adventure that's not really possible.

So Tarrant: here's the point where, were we doing this face-to-face, I would probably let out a small frustrated sigh. Of all of the Blake's 7 regulars, he's probably the most difficult. It's not the fault of Steven Pacey, who will continue to act his socks off for the next two years from underneath a very silly curly perm hair-cut. The problem is that no one ever really quite nails what sort of character Tarrant is supposed to be: here he's rather smart and dashing, with a wry sense of humour. As the episodes progress he is sometimes heroic but sometimes a violent bully, sometimes intelligent and sometimes stupid, occasionally likeable but often-times rather irritating. There have been characters in Blake's 7 who have been under-utilised, like Gan or Jenna, and one or two who have been rather thinly drawn - we'll get to Soolin in 12 reviews' time - but no one is as inconsistently drawn as Tarrant.

I suspect he's a casualty of indecision over how Season 3 was going to proceed. The original plan to replace Blake (Gareth Thomas) was to physically replace him: write Blake out, and then write in a new heroic rebel leader to take his place. There's some evidence that Del Grant (Tom Chadbon) in "Countdown" was originally developed as Blake's replacement, and it's clear Del Tarrant was a pretty firm contender as well. By the time the decision was made to simply have Avon take control, it seems likely that Tarrant was already written into the scripts and possibly cast as well. He's a hero with no place actually be the hero, and as a result the writers struggle to work out what his role in the series is actually supposed to be.

Michael Sheard features here as Section Leader Klegg, the leader of the squad Tarrant has managed to successfully take over. It's a nice change of pace for Sheard, who remains most famous for playing Mr Bronson in Grange Hill and Admiral Ozzel in The Empire Strikes Back. Here he's a mean, unshaven, gun-wielding thug - a role he surprisingly plays very well.

While all of that is going on, Cally has been rescued by a hospital ship en route to the planet Chenga. Vila is on Chenga with a broken arm and on the run with two primitive locals from the 'hi-techs'. John Hollis gives a nice performance as the primitive Lom, but he's sadly under-utilised. When Vila is captured by the 'hi-techs' they turn out to be two attractive young women who relieve his pain and escort him to a medical centre. It's a weird set of scenes, played so broadly for laughs that it feels a bit like watching Monty Python. Michael Keating does comedy very well, but to accommodate the storyline Terry Nation has to write Vila is particularly gullible and stupid.

In the medical centre Vila is reunited with Cally, as well as President Servalan (Jacqueline Pearce) who is rescued from Sarran for no particular reason. This continues the decline of Servalan as a character in Seasons 3 and 4. Last episode she was refocused as a weirdly sexualised cartoon villain - now she's beginning to randomly turn up for no solid narrative reason. It's a deep shame, because in the first two seasons she has been an exceptional character.

There's a twist, of course: it's not a hospital but an organ bank, and both Cally and Vila are to be euthanased before their internal organs are harvested for the people of Chenga to use. It's a nicely horrific concept, but it's foreshadowed much too obviously in advance. There's also insufficient time to actually develop a story around it, making this half of the episode more a case of Terry Nation shouting 'wait for it! waaaiit for iiiit!' from behind his typewriter.

We leave the episode with Avon in charge of a full crew once more, although precisely what they're all going to do - or what state the Federation is in - is up in the air. It's a pretty scrappy episode, but the good elements on the Liberator certainly outweigh the bad ones down on Chenga. This leaves us two episodes into the season with a spotless quality ratio of 100 per cent.
Posted by Grant at 7:01 PM