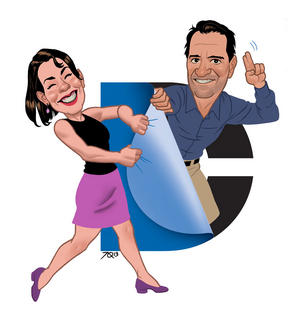 For the past few months DC executives Bob Harras and Bobbie Chase have been answering fans' questions via a guest interview column on Comic Book Resources. This week was the final instalment of that column, as DC Comics has made it clear to CBR that they aren't willing to continue with the format if they're going to keep getting questions they're not comfortable answering (specifically, in this case, a question about DC's decision to hire openly anti-gay writer Orson Scott Card to write a short Superman story).

Harras has already launched a new regular blog on DC's own website to spruik new storylines and artwork, but the damage has already been done. Before they cancelled the column DC was a company encouraging an open dialogue with its fans. Now it's a company hiding from difficult answers.

Now my personal experience in professional marketing is not overly extensive, but even I know that openness and dialogue will always win you more fans than closing up shop and putting a wall between yourself and your consumers. CBR, and comic book readers, deserved better than this.

Under the cut: reviews of Age of Ultron, Batgirl, Batman, Batman and Red Robin, Constantine, Hawkeye, Saga, Star Wars and Thor: God of Thunder. Not reviewed is Demon Knights, as I've failed to track down a copy of that yet. This all leaves me just one week behind, and hopefully I can get this week's books reviewed by the end of the weekend.

And now, on top of post-apocalyptic horror, Bendis also gives us time travel. It's a surprising development, and one that opens Age of Ultron up to a significant degree - things aren't just going to be easily reset by the end, now that Wolverine plans to travel back in time to murder Hank Pym before he has the chance to build Ultron in the first place. Hitch and Neary's art continues to be sensational, and I continue to be enormously impressed by this comic. (4/5)

Gail Simone returns to Batgirl just in time to wrap up the continuing battle between Barbara Gordon and her sociopathic brother James.It's a great conclusion, setting up new complications and trauma for Barbara in the future, but the real highlight of the issue was Barbara's conversation with flatmate Alysia. Barbara admits that she was once shot and rendered a paraplegic for several years. Alysia confides that she is transgendered. I am so pleased with both the inclusion of a transgendered character and with the realism and sensitivity with which Simone introduced this element. (5/5)

This was a surprise: after the emotionally turbulent events of "The Court of Owls" and "Death of the Family", we're treated to the first part of a very traditional, old-fashioned Batman adventure. It works like a palette cleanser, giving us a bit of breathing room between the end of one storyline (and, of course, Damian's death over in Batman Incorporated) and the beginning of the next. Good solid stuff, with nice guest art by Andy Kubert and Sandra Hope. (4/5)

This is very much a book of two halves. One half is a rather tacky story of Batman kidnapping Frankenstein (the superheroic monster, not the fictional scientist) to find a way of resurrecting Damian. This is a bit silly, and exactly the kind of story I hoping DC would avoid with Damian's death. The other half features Bruce Wayne discovering a whole side to his son's life that he wasn't previously aware of - and an unexpected encounter with Carrie Kelly, the young woman who became Robin in Frank Miller's The Dark Knight Returns. That half is fantastic, it's just a shame it has to share the book with something else a bit unfortunate. (3/5)

In this issue John Constantine is confronted by the Spectre, but within a page or so he's convinced the Spectre not to take his soul but to leave him be instead. In the good old days this could have been a major storyline as John slowly manipulates the Spectre to take somebody else, or to somehow make it so that the Spectre can't take John's soul without destroying the world or something. Now it's done in a page. This is John Constantine as plotted to be a superhero comic - it wasn't immediately obvious in the first issue but it's sticking out like a sore thumb now. The writing's okay, the art's fine, the character wasn't intended for this style of storytelling and it shows. (2/5)

Another issue of Hawkeye rolls around, and I'm feeling like I could almost write the review on automatic: writing exceptional, artwork exceptional, storyline inventive, dialogue hilarious, lather, rinse, repeat. There's not another superhero comic on the market at the moment that is this consistently brilliant. This issue we focus on several of the women in Clint Barton's life, and the relatively disastrous effect he has had on them. I particularly liked the inclusion of Jessica Drew - Spider-Woman has been one of my favourite Marvel characters since childhood. This issue is very much the calm before the storm, if the ending is anything to go by. (5/5)

The final issue of the second arc is a little underwhelming at first. The bulk of the issue is a single scene that's mostly dialogue, and Fiona Staples' typically outstanding art seems little below par. I think it's the design of this issue's new character, the identity of whom I shall not spoil. It does end with a wonderfully left-of-field cliffhanger, but that's not quite enough to lift it back up to the standard I've come to expect. From here the comic takes a little time off so that Vaughn and Staples can get through enough pages to ensure there are no delays during arc number three. (And the poor mouse...) (3/5)

Brian Wood continues to write the most Star Wars-esque Star Wars comic of all time. The highlight for me is the sequence featuring Han Solo and Chewbacca attempting to escape Imperial authorities on Coruscant. Wood absolutely nails the dialogue and interplay, while D'Anda's artwork manages to express the look of the characters perfectly while still giving them a nice comic book appearance. There's also a great new variation on the "Darth Vader chokes a disrespectful officer to death" scene. If Disney have any sense at all, they'll work out a deal to leave Star Wars here at Dark Horse where it belongs - this stuff is too good to ruin by shifting the entire operation over to Marvel. (4/5)

Time travel seems to be in the minds of everybody at Marvel right now. Age of Ultron's travelling through time, All-New X-Men is travelling through time, and now Thor: God of Thunder sees the titular superhero teaming up with his old, eye-patching self to fight their mutual enemy in the distant future. This is a great kick-off to the second half of the Gorr the God Butcher arc, with a great cliffhanger ending and promise of some apocalyptic god-on-god battles in the near future. (5/5)