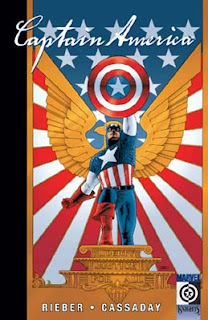 When the planes hit the World Trade Center in September 2001, it had an understandably profound effect on the USA, as well as for the USA's various artists and writers. There was an overwhelming desire to somehow process the trauma of that horrific attack, whether directly as in Oliver Stone's film World Trade Center or obliquely as in Matt Reeves' effective analogue Cloverfield. Some writers were attracted to the idea of exploring the USA's relationship to the attacks, what the nation had done to make madmen wish to undertake them, and what responsibility the USA ultimately had for what had occured.

Aaron Sorkin famously devoted an episode of The West Wing to trying to untie the gordian knot of patriotism, guilt and trauma. By most accounts, he famously failed. Here, in the first story arc of the 2002 Captain America, John Rey Nieber attempts to do something similar: process the horrors of 9/11 and America's liability in letting it happen, through the eyes of Marvel's first superhero.

I want to say going in that this was a catastrophic idea. It was well-intentioned, but foolishly wrong-headed. Superheroes exist atop a wafer-thin suspension of disbelief, and if any text within the genre is to succeed it has to carefully negotiate and maintain that suspension. Why would Superman fly around stopping muggers and car crashes when he could be out solving world hunger and ending every armed conflict? Why on Earth wouldn't Batman simply kill the Joker, thus saving the lives of hundreds of innocent future victims? For that matter, why is the security on Arkham Asylum never improved? If you think about real-world implications, superhero stories generally fall apart. That's exactly what happens here.

By picking up Captain America with the titular Captain digging through the wreckage of 9/11, it immediately begs the question: where was everybody? SHIELD didn't stop the planes? The Fantastic Four didn't? The X-Men didn't? New York is a city full of superheroes. Were they all busy that day? As the real world enters the world of Marvel Comics it punctures it, and as a result it's difficult to take the rest of the story very seriously.

The rest of the story arc is very straight-faced, and rather noble, and filled with incredibly blunt visual metaphors (my favourite is Cap hanging for dear life to the end of an enormous American flag that's on fire). John Cassaday's art is beautiful, and he draws an absolutely wonderful Captain America, but the script he's adapting simply isn't worth his effort.

I understand why Nieber attempted to write the storyline he did. I appreciate his bravery in doing so, and opening himself up to a range of vicious attacks from comic readers unwilling or incapable of engaging in such a hot button debate. I just wish the bravery could have been matched with a better realisation of its ideals, and didn't so regularly resort to cliche.
Posted by Grant at 7:09 PM