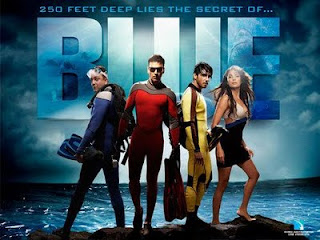 I'm not averse to the occasional Bollywood film, when the mood takes me. Culturally speaking, Bollywood is a highly distinctive form of cinema. Genre in American-dominated English-language cinema is generally a set of hard-and-fast rules, where elements are fenced off from one another so that a film can only be one or at best two things: a science fiction film, a horror flick, a romantic drama, a musical, and so on. These definitions are much more fluid in Bollywood cinema. Pretty much everyone knows that it's a form of motion picture where song and dance numbers can be inserted into any story. A film can shift from slapstick comedy to drama to confronting violence without a pause or second thought.

Sadly this old-school Bollywood method of film-making - a sort of "stick everything to the wall and see what happens" approach - is in decline, replaced by new films that increasingly attempt to ape the conventions and appearance of American cinema. This is a shame; I think India is losing something very distinctive and rather wonderful in the process. Blue is a case in point.

Blue is a 2009 Indian action film directed by Anthony D'Souza. It's an extremely glossy affair, drawing liberally on Hollywood films of the time including The Fast and the Furious franchise and Into the Blue. It follows a group of treasure hunters looking for a lost shipment of valuables that went down with a British ship en route to India in the 1940s. I don't need to describe the plot in any more depth that this, because my description already has more depth than the film it describes.

This lack of originality wouldn't be a problem with a few songs to break up the mood. Blue has two: an unimpressive montage of the female lead (Lara Dutta) in various states of undress, and very bizarrely a full-blown dance sequence guest starring Kylie Minogue. It's the worst song Minogue has ever sung, and she's proved several times over that acting isn't one of her greater talents.

Viewers seeking a decent Bollywood action film would do better tracking down Dhoom and its similarly good sequel. Those films combine action with humour, music and dance in a far more breezy and enjoyable fashion than this. Blue tries to extend itself from India towards Hollywood, and falls in between in the process. I don't recommend wasting time on it.
Posted by Grant at 12:15 AM