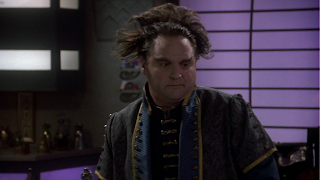 It's strange to watch a Babylon 5 episode with such comparatively subtle and nuanced dialogue. Londo's storyline, in which he must convince two teenage runaways to return to their home world and accept their arranged marriages, feels like it should be deeply tedious and irritating, but Fontana's dialogue makes it work marvellously. Londo gets a great monologue midway through the episode ('My shoes are too tight.') that further cements the fairly theatrical nature of the series as a whole: the characters are at their best when talking in monologues.

Other observations, as always, in dot point:
I'm definitely calling this one a win. It was a solid and entertaining 42 minutes of television. We're seven episodes in, and we're scoring three out of seven - or 43%.
Posted by Grant at 9:02 AM