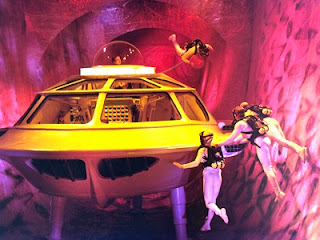 During the climax the submarine is destroyed and one of the crew dies. The survivors have to make it out of the body on their own steam. They achieve this, and the credits roll as the crew - back to normal size - are congratulated on their success in saving the patient

I like to think that somewhere there's a deleted scene where in the next room the Russian defector's head explodes like a ripe melon as a nuclear submarine the size of a bus returns to normal size inside it.

I think there's an easy trick with these kinds of early Hollywood science fiction blockbusters, and that trick is to 'go with it'. Submarines left inside the brain and ignored? Go with it. Tapping into the lungs to replenish an oxygen supply when you're the size of a blood cell? Go with it. Miniaturising people in the first place? Go with it. This in mind, Fantastic Voyage is quite an engaging adventure film. I've read that 20th Century Fox is trying to remake it in 3D with lavish computer-generated effects and James Cameron acting as producer. I really hope they don't. Science fiction films this old don't work well with a contemporary mindset.
Posted by Grant at 9:22 AM